“Had there been fire service facilities in the district, at least some portions of my house could have been saved,” one Kamjong High School student Rayar Jamang lamented.

Barely two days after the Fire Safety Week was observed across India, the house of one Kamjong High School student Rayar Jamang, who is to appear in the class 10 examination, was completely razed by a huge fire that broke out on Thursday night.With no fire fighters in the whole Kamjong district, his family helplessly prayed and watched as their house in Kamjong’s Alungtang (middle locality) was burnt to ashes on that fateful night.

It was in 2016 that the then Congress government created seven new districts of which Kamjong was one. It's been almost five years now. But the government is yet to set up fire service sub-stations even in the district headquarters. In the absence of firefighting vehicles and personnel, this Imphal Free Press reporter witnessed how the Kamjong police and locals struggled to douse the fire by splashing buckets of water.

The police and locals were able to prevent further spread of the fire to adjacent areas but could not salvage the house.
Rayar’s mother Phungreiwon said that she woke up to the sounds of vessels falling down in the kitchen around 9:15 pm.  “When I went in to check in the kitchen, I saw the raging fire in the kitchen,” she said, adding that people also took time to intervene as the area is sparsely populated.

“Had there been fire service facilities in the district, at least some portions of my house could have been saved,” she lamented. 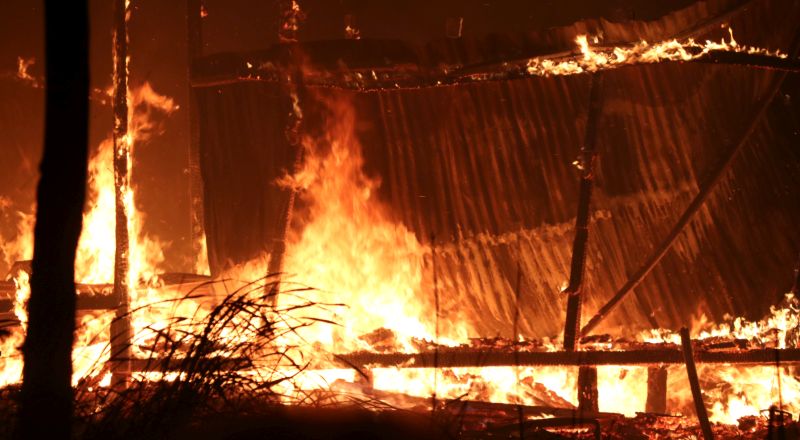 As told by her, properties including the house worth around Rs 30 lakh were completely burnt down and only a few tin roofing sheets were left.

Rayar, while recounting the incident, said that he was awakened by his mother and he along with his two younger sisters had to escape from the window.

“All my books and documents were reduced to ashes,” teary eyed Rayar said as he is preparing to appear in the class 10 examination.

Raya’s father Jackson Jamang, a shopkeeper, was away when the fire broke out.  Jackson’s elder brother Peter Jajo contended that the government has been neglecting the district for years when it comes to essential services. 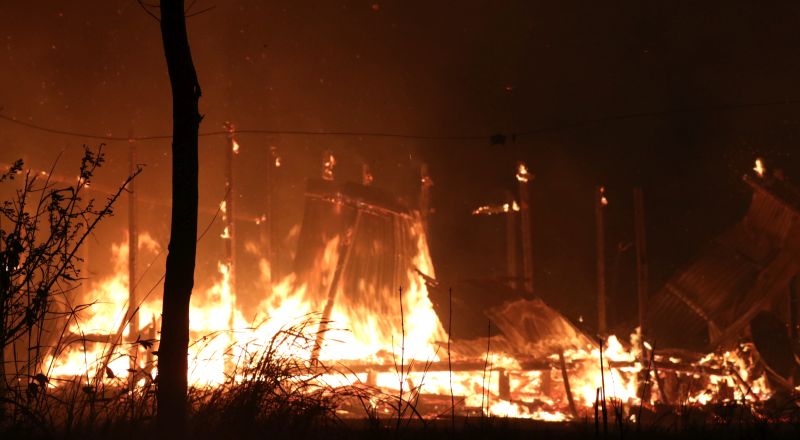 “Kamjong is now a district, but there are no proper facilities and infrastructures to ensure quality life for the citizens,” he said and drew attention of the government to fulfil the basic infrastructures and needs.

Meanwhile, joint director of Manipur Fire Service L Nabachandra told the Imphal Free Press that the Manipur Fire Service is one of the most neglected departments and is being crippled by the lack of infrastructures and manpower.
“Presently, there are altogether 16 functional fire service sub-stations and the headquarters operating from Imphal with 355 actual posts,” he said.

The government in 2016 had sanctioned 238 posts for fire fighting personnel for setting up 12 more sub-stations. However, the sub-stations are yet to be set up due to lack of infrastructures. The recruited personnel are being posted in the present sub-stations as seniors have retired with the passing of time,” he stated.

As told by him, there are 182 vacant posts in the department. Nevertheless, we are trying our best to respond timely and save human lives and properties with available resources and sincere efforts of the fire fighting personnel, he added.

While many sub-stations are without proper buildings, quarters or garages, Nabachandra said that such lack of basic infrastructures may degrade the morale of the personnel in the long run.

The joint director also stressed the need to have several mini fire service sub-stations in the hill areas as the region is prone to fires and poor road connectivity hampers immediate response.

In such a scenario, though the government had introduced ‘Go to Hills’ and ‘Go to Village’ missions, the people in the hills and interior parts of the state still await what the “Citizen Centric Governance” promised to deliver to the people.