Manipur Water Resource and Relief and Disaster Management Minister Awangbow Newmai and Kshetrigao MLA Noorul Hassan on Thursday inspected the vulnerable and degraded riverbank of Iril River and its tributaries.

During an interaction with the media, Newmai said that expert study and technique on soil condition is required for a permanent solution to avoid flooding and soil erosion during the rainy season.

For permanent solution of affected areas, the minister said that the department will submit a DPR to the concerned Ministry. In a first-hand visit, an expert team for scientific studies will take up the matter and more importantly, soil conditions should be studied first for appropriate work and technique to maintain the quality of the riverbank, the minister said. 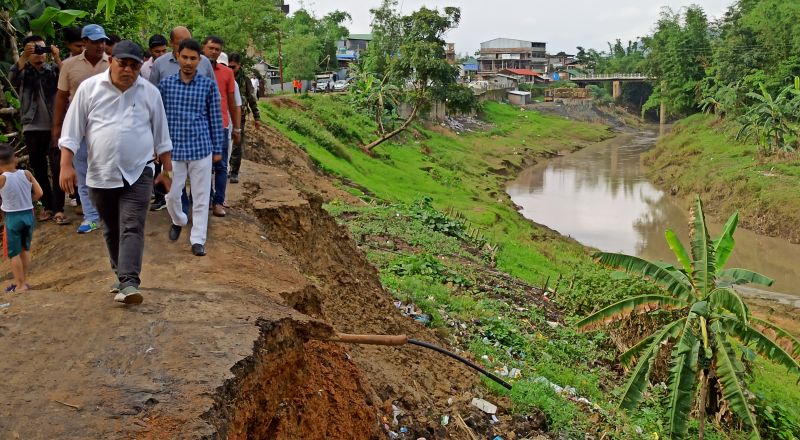 Most part of the riverbank, not only for Iril River but also for other rivers, also requires study of soil condition, the minister said, adding that temporary measurement will not solve the degradation. The minister also stated that this year, during the pre-monsoon season, some rivers crossed the danger-level and caused damage to villages situated on riverbanks.

Must Read: Environmental flows worsening due to increasing water extraction from rivers in Imphal valley

So adequate and proper scientific study is required before taking up any work, he added. Further, he informed that, based on the report of the study, he will put up the matter to the chief minister and steps will be taken to cover all rivers. The ministerial team noted the critical areas such as left bank of Iril River at Kshetri Awang Leikai Top Khongnangkhong, Salaudin to Jalil Mapa, Naharup Chandan Thongkhong, Khongjin Culvert Achouba and Saikhom Mapa.

Moreover, the present conditions of streams from Yaralpat and Gurupat Thong, which are about 5.5km in length, were also inspected and the minister decided to take up de-siltation work after the monsoon season. MLA of Kshetrigao Noorul Hassan said that the degraded riverbanks from Top Khongnangkhong to Naharup Konjil of Iril River have been neglected for the last many years.

The government and concerned departments are looking forward to taking up appropriate steps into work, the MLA said, adding that he trusts and believes that the present government will not neglect the vulnerable situation of the constituency.

He also informed that the team also visited the Yaralpat Khong where it is planned for 5.5 waterbody construction for providing the water for double cropping. The ministerial team was accompanied by additional chief engineer (Flood), Y Homendro Singh; Shahid Shah, SE and Remmei Ningthoujao EE, WR Department and other officials of the department.

It may be mentioned that the inspection by the state Water Resource and Relief and Disaster Management Minister took place after the Imphal Free Press took serious note of water bodies in the state drying up and persistently highlighted the plight of the people faced with drinking water scarcity and flood threats in several of its reports.

Must Read: How increase in unchecked illegal mining is causing Manipur’s Wangjing-Heirok river to disappear