L Jagat was adjudged the Man of the Match for his 5 wicket haul and 76 runs knock.

Shadow Thangmeiband opted to bat first after winning the toss, where they managed a low score of 97 runs for 10 wickets from 28.1 overs with opener Thomson making 47 runs while the rest of the batsman failed to cross double figure marks. 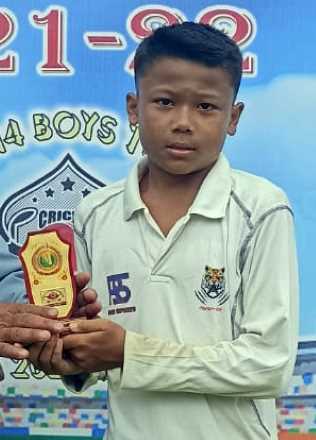 PTRC opening batsmen had a smashing time with S Richie making an unbeaten 34 runs from 37 balls while Robinson S also remained not out with 51 runs from 52 balls for the clean victory. PTRC bowler Benson Yumnam was declared the Man of the Match for his 4 wickets haul.

CDC opener Th Rakesh worked his way to make 46 runs while Priyojit Narengbam got 38 runs to put up 203 runs for the loss of 9 wickets from 40 overs. UCC bowler K Gulson bagged 3 wickets while Shyam Kumar Ray and Th Yoihenba took 2 wickets each.

Chasing the target, UCC batsmen were herded out for 115 runs for 10 wickets from 36.3 overs. K Gulson top scored with 34 runs while Roshan Das got 11 runs. CDC bowler M Jodiba claimed 5 wickets while Khurshid Alam took 3 wickets. Jodiba was later named as Man of the Match.

In reply, RRCC could manage 117 runs for 10 wickets from 29.4 overs with Haojalen Kipgen making 43 runs but was not able to save the match. YWC bowler L Jagat took 5 wickets while Asishkumar Singh claimed 3 wickets among the chief wicket takers. L Jagat was adjudged as the Man of the Match for his 5 wicket haul and 76 runs knock.