The Second Manipur Olympic Games-2022 will stretch for five days and with participation of around 6000 sportspersons representing all 16 districts who will compete in 34 disciplines.

Manipur Governor La Ganesan kicked off second edition of “Manipur Olympic Games-2022” after a gap of 34 years at Mapal Kangjeibung, the oldest living polo ground in the world.

The Second Manipur Olympic Games-2022 will lasts for five days and will see the participation of around 6000 sportspersons representing all 16 districts who will compete in 34 disciplines, including indigenous sports.

Speaking on the occasion, Governor La Ganesan stated that he was pleased to be a part of the Opening Ceremony and added that the basic objective of games and sports was to develop good citizenship
among boys and girls by forming their character - training them in the habits of observation, obedience and self-reliance and promoting their physical, mental and spiritual development in the true spirit.

He expressed gratification on learning that 34 (thirty-four) sports disciplines, including indigenous sports disciplines such as Kang, Mukna, etc and about 6000 (six thousand) sports persons will take part in the Games.

Saying that Manipur had produced many Olympians and National Players, he expressed confidence that the State would keep producing many more both at international and national levels in the years to come. He further stated that youths who are highly disciplined, physically fit, mentally alert, spiritually sound and loyal to the country are needed at this juncture, much more than that at any other time in the past.

“If they are provided with infrastructural facilities, incentives and give a little more thrust to sports activities in rural areas, they will emerge as distinguished and excellent sports persons of National and International stature,” he said.

The Government of India endorsed establishment of National Sports University in Manipur in recognition of the wonderful performance of our players, the governor added.

He expressed confidence that with the initiative taken up by the Government of India in the recent past in the field of games and sports, the future is good for all, including the sports persons. He stressed the need for the State and the corporate sector to patronize more if we have to achieve more, as without funds there is no hope.

Biren recalled the recognition given by Prime Minister Shri Narendra Modi to the sports talent of Northeast people during a chief minister’s conference. He also gave credit to all the sports associations and stakeholders for the achievement at the Commonwealth Games 2022.

He maintained that the Manipur Government after consultation with the Manipur Olympic Association had decided to organize the Games every year and added that budget for organising the same will be allocated separately from next year.

The chief minister further said that sports represent an important place in Manipur where different communities reside together, as there is no religion or caste in sports. He stressed the need to organize the State Olympic Games in festive mood with showcases of many cultural programmes from next year.

Biren also announced a reward of Rs 50,000 to the players’ contingent of Ukhrul District in appreciation of the contingent’s performance in the march past. He also wished for the successful conduct of the event. 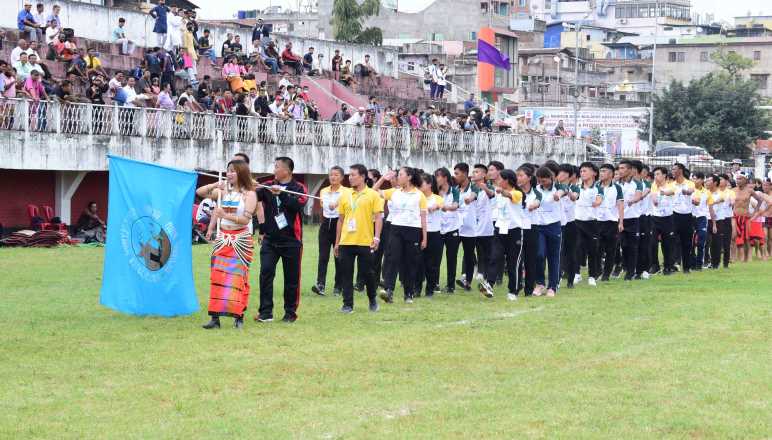 During the opening ceremony, the Governor raised the flag of Manipur Olympic Association. Wushu Player of the State Naorem Roshibina Devi took oath of all the participating districts.

Cultural programmes consisting of Thang-ta, choreographic representation named ‘Colour of Oneness’ and performance of theme song of 2nd Manipur Olympic Games were the main highlights of today’s opening ceremony. (with inputs from DIPR)