NH-150 and the unpleasant experience during COVID-19 Pandemic

The presence of black tarmac that resembles a river tells of the quality of the road, writes SK Rinchanpam.

Roads and highways are considered as a lifeline of any modern civilisation in relation to human beings and their aspirations for winning daily bread. Travelling from one place to another in search of means of survival is the nature of living beings. Likewise, journeys from my village to Ukhrul town and Imphal city during childhood days gave the same sensation and flavour. I grew up in Chingjaroi village in the northern region of Ukhrul District, Manipur along the National Highway 150 that connects Ukhrul and Jessami, which is also a part of National Highway 202 that connects Makokchung and Imphal via Jessami and Ukhrul. Growing up, I have fond memories of the road particularly the first visit to Vouzii, an enclave of paddy fields near Razai, another neighbouring village along the NH 150 (202). Upon seeing the blacktopped road for the first time, I was concerned that I asked my mother, who was walking alongside; how to cross the river.\The response of my mother that it was only a road constructed by the Government relaxes my nerves. She did emphasize on the word Government to express the magnanimity of the Government in the lives of the peoples. Indeed, the presence of black tarmac that resembles a river tells of the quality of the road and the presence of periodical maintenance. Fast forward to a decade or more, the region seems to have reversed backwards while the rest of the world is clocking rapid economic growth and infrastructural development. Patches of black tarmacs barely seen hither thither are now merely a rare group of islets in an ocean of potholes leave alone a brief stretch of road that could be called an all-weather blacktopped Highway.

My latest rendezvous with potholes and the pathetic conditions of the Highway began upon returning from Mumbai during the National Lockdown in the wake of COVID-19 Pandemic in the month of May. Under the Village Council SOP, all the co-returnees from my village underwent another quarantining process at the Makeshift Community Quarantine Centre in Kazingdang valley between Razai Village and Namrei Village along the Highway. Rainy season had just begun and I witnessed glimpses of waterlogging over the potholes that had given dust and bumpy rides during dry seasons. However, like I had always blindly hoped before I left my village for Mumbai the last time, I again long for repair and maintenance over the last six months without losing hope but to no avail. 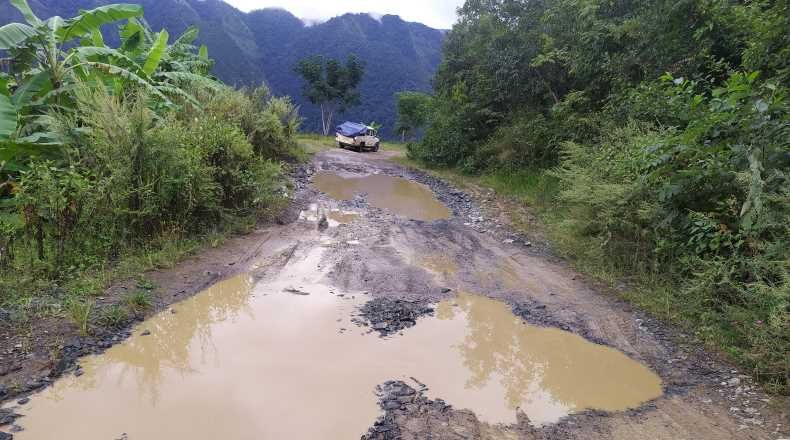 Meanwhile, the road has seen bushes growing along the sideways blocking the visibility. Visibility at turns, especially when it is a sharp turn, is a thing of concern on winding roads in a mountainous region like Ukhrul District.

I speak nothing of road signs, under the National Highway safety norms, that are absent but the weeds and shrubs that are blocking the view. I have witnessed at least three road accidents myself though many more cases have been reported. Fortunately, these unfortunate accidents did not claim lives. Must we wait till it claims lives?

Lack of urgency and commitment in tackling the dilapidated road condition is discouraging. Like it has missed out on rapid scientific and technological revolution, the region and the present generation seem to have gone amiss on various developmental projects again. It is unfortunate that the National Highway connecting Ukhrul and Jessami has never lived up to

its intended objective of bringing development and garnering to the benefits of the region. According to the reports in Ukhrul Times, Tangkhul Naga Wungnao Long (TNWL) – the apex body of the Chiefs of the Tangkhul Naga villages – have expressed their concerns over the sorry state of the National Highway and assert for immediate execution of maintenance programmes including clearance of bushes and repairing of the road to address the public grievances. However, realities at the ground zero have not changed and the concerned authorities seem to have turned a blind eye once again.

Given the lack of commitment from the Government, one questions the nature of governance and the spine of the State in the face of Private Companies. The intervention of Privatisation seems to have spoiled the game before it even begins. Though the cost to the exchequer has increased manifold, changes and development have not hit the ground running hitherto. According to a report in Sangai Express on 19th August, 2019, Ministry of Road Transport and Highway (MoRTH) have spent Rs 4026.15 crore on Manipur for development and maintenance of National Highways in the last five financial years. Despite such a humongous amount, desired results are far from being satisfactory. Those feign memories of smooth roads in the past remains a distant memory now and seem never to return.

One may, and rightly so, argue that such things could take a backseat in times of pandemic. Indeed, COVID-19 pandemic has shook the entire world. India’s socio-economic health has fared no better since the lockdown. However, the present scenario suggests otherwise. Good connectivity is inevitable for the region during this COVID-19 crisis since all the healthcare systems are concentrated in distant towns and the capital city of Imphal. In times of such medical emergency and crisis, inevitable is the improvement, repairing and maintenance of the roads to battle against this pandemic. However, given the sorry state of the existing roads, it is not only disheartening but life threatening. Concerned authority and ministry of the state must take cognizance of the public grievances to ensure timely decision and execution.

Besides the exigencies from the pandemic, the state must also take the situation by the horn to immediately carry out the needful task as the festive season is fast approaching. Cumulation of both is sure to increase the frequency of movements of peoples. It would be sensible of the concerned authority and the state to intervene and ensure execution of the duties and responsibilities of catering to the public needs and addressing their grievances, should we save the lives of the fellow citizens from accidents and pandemic lest it befalls.

The National Highway 150 is the lifeline of the Northern region of Tangkhul Nagas, home to a huge number of villages. It passes through more than 13 villages and caters to at least 31 villages off the highway in the region. Chingjaroi village is one that is beyond 13 km away into the north of the highway diverging at Razai village. Chingjaroi has more than a thousand households. Citizens of Chingjaroi village have had much to suffer like that of Khamasom, Huishu, Poi, Chalou, Wahong, etc. that are situated off the highway. The road has no traces of renewed tarmac beyond Namrei till Jessami. Thus, concerned ministry and department should undertake the needful action to address the public grievances at the earliest for the common wellbeing in times of COVID-19 pandemic and the forthcoming festive season.

(The views expressed are the writer’s own)