The price rise resulting from the GST rate hike is the same situation where the government is trying to kill its people, and at the same time, the people are not allowed to cry at all.

The maximum population of the state is under the poverty line and they can’t manage the day-to-day financial activities of their families due to the price rise of essential items like kitchenware and other household items. The price of cooking gas crossed Rs. 1200. And now the GST rates on food grains have been raised.

Everybody knows the current price of cooking gas and how the government increases its price day after day. But the farmers, for their agricultural products, are facing the worst situation day by day for the fertilizers and water during the monsoon season because sometimes there is no rain, due to which there is less production of food grains, but at the same time, the government hikes the GST rate on daily essential items, which then becomes hard to survive.

Due to the GST rate hike, many household and kitchen items will become costlier. So, the houses are going to be adjourned sine die amid price rises and GST (Goods and Services Tax) hikes. 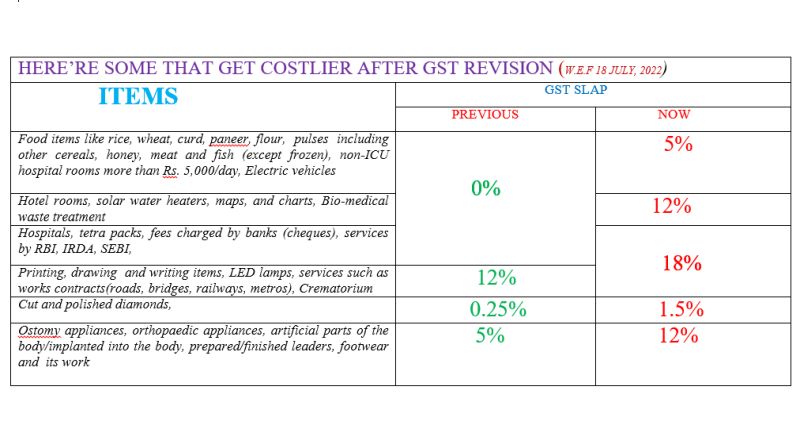 Let us see some technical and fundamental analysis from the above-given table. The above table indicates that our dishes are going to be smaller, forcing us to eat less even if we are feeling hungry because the kitchen items, including food grains, are out of our range to buy because of the GST rate hike. Their prices will be increased.

We see that the government is imposing taxes on power-driven pumps for farming, dairy machinery, poultry, and horticulture machinery, etc., that seem to be targeted at the primary sector and farming. The government is not bothered to help the farmers during the worst monsoon season; instead, it thinks only about how to hike taxes on the products made by the farmers. It also gives us the message that without money, life is not going to be easy.
Since you are taking tax on crematoriums, we are afraid to burn the dead bodies, and in the future, who knows if the bodies are going to be buried or thrown away due to lack of money. Again, we are also so afraid that we get ill due to the fear of government high taxes on hospital services. The application of GST is pushing healthcare toward a business model rather than a service-centric one.
A steep rise of 12 per cent in biomedical waste is unjustified and senseless, and it will raise the cost of running hospitals and clinics, thereby making healthcare more expensive. It will further result in higher charges for patients. It is not reasonable to burden patients with more charges in these difficult times.
In the above table, the government is also imposing high taxes on printing, writing items, and other services. It means the government is targeting the youth of the country and their future through their education system.
Is the government of this country against education and the youth? On the other hand, the government is imposing a lower GST tax on luxury items like gold and diamonds (1.5 per cent) and a higher tax on essential foodgrains (5 per cent), which means the government is promoting rich people. Are you pro-rich and anti-poor?
The price rise resulting from the GST rate hike is the same situation where the government is trying to kill its people, and at the same time, the people are not allowed to cry at all. Playing like a cyclic game, the government is giving a lot of welfare to the people through its schemes on one hand and then taking away from another hand (tax).
In the table, we also see that the government has now hiked taxes on LEDs, electric cars, etc. but these items were promoted by the government with a promise that India would experience less power consumption and free air pollution, and be less dependent on petrol and diesel. What a U-turn on the government’s promise!

Instead of trying to impose nationalistic feelings on us, such as hoisting the tricolour or attempting to divide our people based on religion, the government should first try to focus its attention on how to solve the economic depreciation. I am not against it.

Of course, there needs to be a strong feeling of nationalism among us. But without food and money, how can we survive? To live is the first priority. Let the people of this country survive happily rather than imposing and forcing them to do so.

One can't become a patriot simply by hoisting the tricolour, but doing one's work honestly, loving its people and giving justice is true patriotism. Since you are imposing more and more taxes upon your people, we, the people, are facing a lot of hardships, and it is difficult to survive. It means you have no feeling of love for your people or patriotism.

If the government had it, you might not have harassed your people. It is not possible to bear a feeling of nationalism if the people of the country are being tortured/harassed through some other means. Some days back, we heard that the government has exempted taxes on some of the Bollywood films like The Kashmir Files, Samrat Prithviraj, etc. which are being watched by the rich people but on the contrary, the government is imposing taxes on essential food and kitchen items.

What is the reason that there is no space for taxes on big corporations and companies in this GST rate hike in 2022? The coming trend is that we, the people of this country, feel inferior to criticize the government, which is not a good sign of healthy democracy.

The teeth of the judiciary system need to be sharp, thereby cutting corruption and injustices, and the wings of the media should be set free so that they can fly freely in the air to create a people’s democracy rather than sold news, or else it will be a dictatorship form of government.

State-sanctioned news is maximum propaganda, and real journalism doesn’t need permission to show the truth. We live in a democracy. And in a democracy, we have the right to dissent. Let not the outside influences silence our voices. We need to stand up and raise our voice for a strong democracy. The voice of the people is the voice of God.

Raising taxes on essential items will cause inflation to rise even further. India is dominated by poor and middle-class families. The rise in prices will not only affect the middle class, lower middle class, and poor, but it will also deter people from working in small businesses, entrepreneurship, and start-up business.

Above all, the timing where India is presently facing high inflation, high unemployment, and high rupee depreciation over dollars, i.e. roughly (80 rupees = 1 dollar). We all witnessed that before 2014, the Indian economy was somewhat good and the value of the rupee was high as compared to its present worst condition.

The private sector will do whatever they like to do in the future. We all see how these two network operators, Airtel and Jio, are playing a monopoly of their own since there are no other competitors in the market. Due to this, I do hope the people of the country will again face the worst conditions.

The Confederation of all India Traders (CAIT) has declared a nationwide agitation from Bhopal on July 26 and they demand to make GST rules easy. The CAIT claimed that bringing unbranded food and other products under GST tax would increase traders’ compliance burden. It means doing business is so complicated.

The Indian economy is majorly driven by MSMEs and complicated GST compliance will discourage small businesses, having an adverse impact on MSMEs due to GST. It is unfair to expect MSMEs to make the transition to an online IT platform and expect no errors in return filing. It is an uphill task for the majority of MSMEs, who have little hands-on experience with IT solutions. The cost of deploying professionals is a major concern for micro, small and medium-sized enterprises.

I think, instead of promoting, the complicated GST will hurt the country’s small businesses, which have already been put on hold by demonetisation. On the other hand, there will only be the rise of big corporates like Adani, Ambani, and Tata after all. They will play their monopoly. But the problem is who will listen to our voices?

We all know that in this post covid-19, there is the problem of rising prices all over the world, and the problem is more serious in India than anywhere else. It is just like a great curse on the poor. Rising prices of essential commodities, coupled with wage deflation and increasing joblessness, are pushing poor households in India to a point of distress.

Cosmetic-like measures of the government are unable to address the situation. The deceleration in agricultural growth due to poor monsoon rains adds more headache to this scenario too. It is high time to look into this tragedy of economic errors by the policymakers and the government together, or else it will aggravate the problem of price rises in the near future, which will again be very hard to survive.