CM Biren inaugurated the Van Dhan Vikas Kendra Mela in Imphal and said the revival of the forest areas in Manipur has started.

The chief minister was addressing the inauguration of the Van Dhan Vikas Kendra Mela 2022 at Manipur State Film Development Society, Imphal on Wednesday.

The Mela, which is an exhibition of the best of Van Dhan Vikas Kendra workmanship from all districts of Manipur, was organised by the state Forest department, under the aegis of TRIFED and Pradhan Mantri Van Dhan Yojana.

On the occasion, Biren appreciated the officials of the Forest department for the dedication and hard work towards saving the forest land of the state. He maintained that the state government is not against anyone or any particular community, and had taken up various initiatives to preserve the forest for the sake of society and for future generations.

Biren recalled that the Van Dhan Yojana was launched nationwide by Prime Minister Narendra Modi on April 14, 2018 and was launched in the state on October 14, 2019 to help in transforming the economy of tribal people in the state. 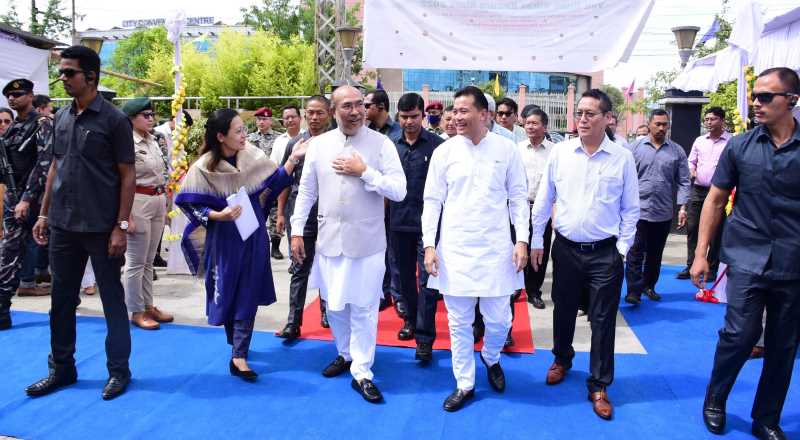 The Van Dhan Yojana scheme is now able to provide employment directly or indirectly to 41,918 members of various Self-Help Groups, he said. He assured all possible support from the government to all Self-Help Groups under various Van Dhan Vikas Kendras, in their efforts to promote forest produce and enhance their livelihood.

He mentioned that the government would try to complete the construction of workshed and storage for minor forest products soon, in consultation with the department and officials concerned.

He further mentioned that the state has huge potentials and resources which are yet to be explored. If value addition, proper packaging and marketing of forest products can be done, the products can also compete in the international market, he added.

He also stressed the need to set up a food processing factory in a suitable place at Imphal.

Mentioning that “forest is our life,” he stated that the government had earlier taken the decision of issuing weapons to the Forest department officials to protect the forest, considering the utmost importance of its preservation.

He warned that legal action would be taken against officials who unlawfully give recognition and approval for settlement in Reserve Forest areas.

Forest, Environment and Climate Change minister Thongam Biswajit Singh, delivering his presidential speech, mentioned the biggest challenges of a society are its economy and employment.

He continued that the state Government had taken up various initiatives for promoting tribal enterprise through value addition, branding and better ways of marketing of forest products.

He also informed that the department is planning to open up kiosks of forest produce in every district for improvement in marketing of the produce. He further appealed to the public for their support in the Government initiatives to enhance development of the State and livelihood of the people.

Tribal Affairs and Hills minister Letpao Haokip stated that the Pradhan Mantri Van Dhan Yojana was launched to improve the livelihood of less developed tribal people and generation of employment.

Speaking on various development programmes taken up for tribals by the chief minister, he appealed to the people to render support and cooperation in development works for timely completion of projects.

Biren also inspected stalls set up by 14 Territorial Forest Divisions at the venue.

Principal chief conservator of Forest (PCCF) AK Joshi, officials of the Forest department and members of Self-Help Groups also attended the programme among others.