IFP IMPACT: Relief and joy lit up the faces of women vendors of the newly opened Mao market as they now have a market shed, though temporary, to sell their farm produce at ease in Imphal.

The long-awaited Mao-Imphal market opened in Imphal on Friday with exotic varieties of fresh flowers, organic vegetables and fruits grown in the hills of Mao, much to the delight of vendors and buyers both, as local produce from Mao are known for high quality and are in high demand.

"With the setting up of the temporary Mao market, the inconveniences faced due to frequent shifting of locations for the vendors who travel all the way to Imphal from Mao to sell their farm produce will be alleviated," a vendor said.

The road travel distance between Mao and Imphal is about 105 km.

As the market opened at Kabo Leikai Nongchup in Imphal West after it was inaugurated by MLA Losii Dikho on Friday morning, women members of Mao market visited Chief Minister N Biren Singh and presented him local farm produce as a token of gratitude for providing the market place.

Expressing appreciation, the chief minister took to Twitter and said that the affection and support of the locals inspired him to walk the extra mile every single day.

“Delighted to share that the temporary Mao Market is now open at North AOC. On this occasion, the women of temporary Mao Market visited and presented me some local products as a token of love. Your affection and support inspires me to walk the extra mile every single day,” Biren tweeted. 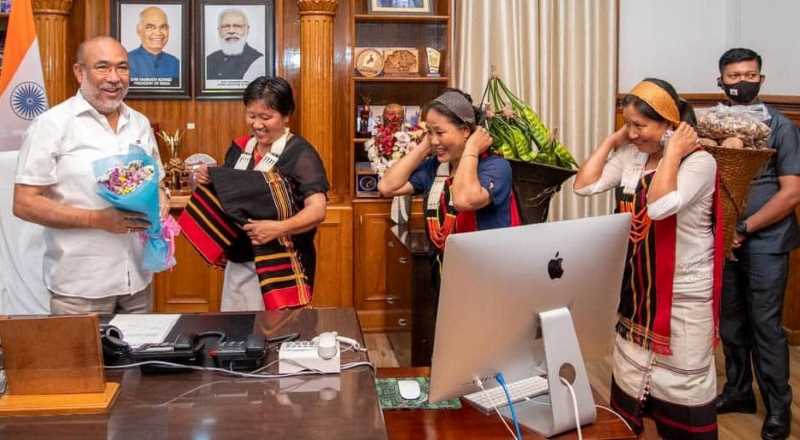 The vendors of Mao market, however, said that they are hoping the state government will provide a permanent location.

"We are hoping that the new state government will provide a permanent location so that the vendors whose livelihood depends on selling their farm produce such as vegetables, fruits and flowers will be able to have a fixed economic viability," the vendor said.

The chief minister had earlier assured that women from Mao will always have markets to sell their farm produce in Imphal. Biren also said that two buses will be provided to ferry the goods daily.

The vendors are planning to open the market on all working days. Around 50 vendors (mostly selling flowers) were installed in the new Mao-Imphal market.

The first Mao market in Imphal was set up at a temporary market shed on July 3, 2015 at the Nagamapal road stretch in Imphal West. Later, it was frequently shifted to different locations as the government was unable to provide a permanent location for the market.

Speaking at the inaugural function, MLA Dikho said that the Mao-Imphal market will not only be a business centre, it will also help to build a good relationship among the people living within the state.

Dikho said that with the blessing of the almighty the soil of Mao is quite fertile and its products are in much demand as they are organic.

Instead of relying on import items, it is high time to have state's own production, he said, adding "If we love our state, instead of always demanding something to our MLAs or the state government, we need to contribute something in the society as a community otherwise we will not be a meaningful citizen."

The MLA also lauded Chief Minister N Biren Singh for acknowledging the importance of the agriculture and horticulture sector which is important for promoting the economy of the state.

It may be mentioned that the Imphal Free Press had highlighted the plight of women vegetable sellers of Mao, and the need of a proper market shed for them to sell their farm produce daily, which is a means of livelihood for the farmers in Mao.

Organic vegetables and fruits produced in Mao area is popular for their rich quality, And, mostly womenfolk of the community carry out marketing activity of farm produce from Mao villages.