The plantation campaign started on July 28 at Tamenglong town.

As a part of its long-drawn efforts to promote afforestation and create awareness among the locals, 44 Assam Rifles under the aegis of HQ 22 Sector of Assam Rifles IGAR (E) is conducting a three-day-long Van Mahotsav in Tamenglong and Kangpokpi districts.

The plantation campaign started on July 28 at Tamenglong town where the forest minister along with Tamenglong ADC chairman and Commandant, 44 Assam Rifles planted a sapling each at Jadonang Park to commemorate the starting of the event, stated a statement issued by its Adjutant.

"On day one of campaign, battalion achieved a rare feat by planting approximately 11,000 saplings in a single day. This was the highest number of plantation done by GREEN WARRIORS of the battalion on a single day", Adjutant said.

He said the various local varieties of saplings planted throughout the district of Tamenglong and kangpokp included local variety of trees. 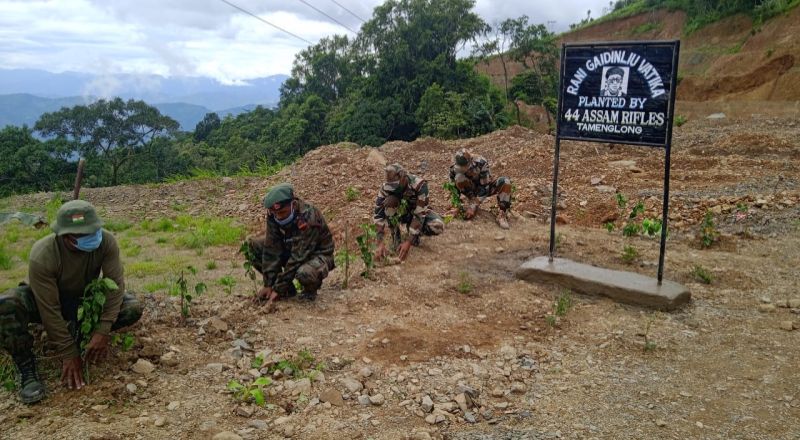 "This year, unit created RANI GAIDINLIU VATIKA along the Khongsang – Tamenglong (KT) road. The vatika, planted along the 07 km of KT road was dedicated to locals of Tamenglong on July 10, 2021. Day two and three of Van Mahotsav campaign are dedicated to strengthen the number of saplings in this Vatika.

On both the days, troops from the battalion planted approximately 10,000 saplings to include Hibiscus and colorful Bougainvillea along the under construction highway from km 5 to Akhui.

These saplings would start blooming by next monsoon season giving this road another address. These saplings along the road would supplement the greenery and would also negate the ill effects of deforestation which is part of the infrastructure development process in the of the region.

Similar plantation drive was undertaken by the unit troops in other parts of the district.

"This year, the unit has planted 66,000 saplings till now and continue with their efforts in coordination with various civil society organisations and youth leader. The green warriors also collected local seeds and saplings from the forest to propagate new plants. The various green mission initiatives and endeavours of the unit are motivating many others to be part of the ongoing drive," the Adjutant said.