Organised under the theme “Becoming the Change”, the event was attended by over 700 Nagas residing in and around Bangalore, making it one of the biggest freshers’ meet in the history of NSUB.

NSUB president D Thopulou welcoming the gathering, expressed his heartfelt gratitude to all the subunits of NSUB for their relentless support and acknowledged the foundation laid down by the former leaders.

He further said that the union shall work hand in hand with the Naga fellowships and churches in the city to foster unity and welfare of the Naga people, the release stated.

Around 100 freshers were present for the event and a blessing prayer for the freshers was given by Rev Yarngam Muivah, Pastor of Tangkhul Baptist Church Bangalore. A speech on behalf of freshers was delivered by Jeviholi Swu, thanking the family of NSUB and urging the freshers to stay connected with the family and give their best in whatever they do.

Naga students studying in different institutions in the city presented group songs and different folk songs and dances were performed by subunits of the NSUB, the release stated.

A vote of thanks was delivered by Stoilung Rangteina, Cultural Secretary of NSUB followed by a closing prayer by Wijonbou Dirinamai, Pastor of Liangmai Christian Fellowship Bangalore. The first session was followed by a Naga feast.

The General Secretary of NSUB stated that the second session of the program included solo and group performances from various Naga Artistes. 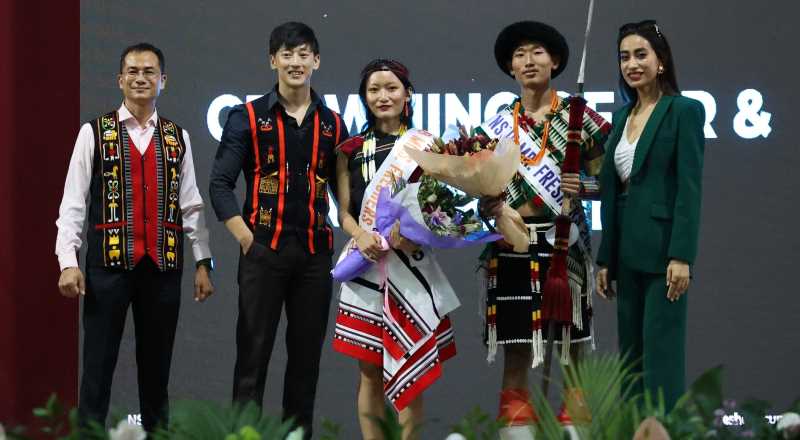 Mr and Miss Fresher of NSUB contest was one of the special items of the evening; the contest was judged by Vijay Kapanee, Songashim Rungsung, Rubaru India 2020-21 and Gloria Tep, former MTV model.

The titles of Mr and Miss Fresher were bagged by Elow Kayina, representing Mao unit and Miss Aileen Samjaila of the Maram unit respectively.

JN Langa Standhope of Poumai and Dindin Newmai of Zeliangrong were adjudged for the best traditional costumes title, the release stated.

The event concluded with a closing prayer by Levi Maheo, Pastor of Mao Fellowship Bangalore.

The office of NSUB, along with all its subunits, expressed their gratitude to all the Nagas in the city for coming together as one on this joyous occasion. This was the first offline event post pandemic and was overwhelming to see a huge number of Nagas turning up for the event which was even more than the previous years, Ruth Gonmei added in the release.

The NSUB also urged all the Nagas residing in Bangalore to join the family and stay connected.