Manipur joined the rest of the globe in observing World AIDS Day 2021 on Wednesday to support those affected by HIV/AIDS, spread awareness, and offered tributes to those who lost their lives to the disease.

As a tribute to all the lives lost in the battle against AIDS, a rally was conducted from the Northern gate of the Kangla Fort to its Western gate on Wednesday evening. The rally was organised by Brothers In Arms (BIA) and Sayon Entertainment under the theme, ‘End Inequalities, End AIDS, End Pandemic’ and the sponsorship of Manipur State AIDS Control Society.

Following the rally, candles were lit up in front of the Kangla gate and homage was paid to the departed souls by observing a two-minutes silence.

Speaking to the media, BIA executive member Arambam Mangamba said the day is observed in memory of those who died of AIDS. For the ones who are currently living with HIV/AIDS, everyday is a day of struggle and misery, he said.

The main purpose of the day is to give awareness on the impact of the dreadful disease on people's lives. However, the patients are able to live a better life by getting treatment with the advancement in medical science, he added.

A musical tribute was also organised at Salom Farm in Mantripukhri, Imphal East. 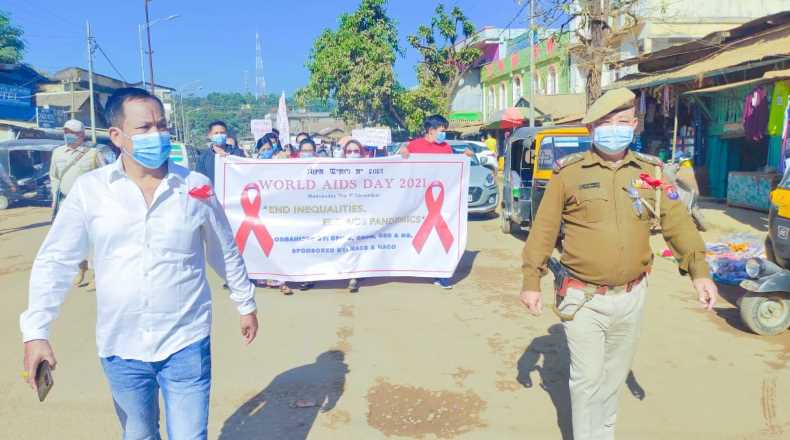 In Indo-Myanmar border town Moreh, the occasion was observed under the sponsorship of National Aids Control Organisation and Manipur State Aids Control Society.

The awareness rally with the theme, ‘Let’s all together end inequalities, End Aids Pandemic' started from Trade Center Moreh and culminated at Moreh Police Station. It was flagged off by officer in charge - Moreh Police Station Kh Dilipkumar and president Meetei Council Moreh M Thoiba Meetei.

The rally was participated by staff of various Targeted Intervention NGOs and many People Living with HIV (PLHIV). After the rally ended, a Red Ribbon Campaign was conducted to show support and solidarity to the PLHIV. After concluding the Red Ribbon Campaign, a Covid Vaccination Camp was also organised with PHC Moreh, during which 18 Injecting Drug Users, 10 PLHIVs , 12 Female Sex Workers and 19 Migrant workers were vaccinated.

The rally began from the medical gate and culminated at the heart of Tamenglong where a formal function was held at Shekinuh Inn under the theme, ‘End inequalities, end AIDs and end pandemic.’

Banners and placards were raised while slogans were chanted as the rally moved towards the main venue.

A two-minute silent prayer and candle lighting was observed to show respect for the departed souls who fell victim to AIDS.

Of the 183 HIV/AIDs patients, 23 lost their lives while 129 patients are actively taking ART, he said. Another 20 patients have been shifted from the district to the nearest ART centre, he added.

In his chief guest speech, DC Worshang Hungyo urged all the HIV/AIDs patients to take ART regularly and maintain a diet to keep the body healthy. He assured all possible help from district administration Tamenglong. Dr Namjupou Panmei talked about the present condition of drug users in the state.

“We have an OST Centre at District Hospital Tamenglong and a Satellite Centre (AWARE NGO) as well to dispense the OST Drugs to the clients registered at the centre as a means of rehabilitation,” Dr Namjupou said.

He also informed that Tamenglong has 219 clients registered at the centre and has a cumulative number of active clients ranging from 68-80 clients. He urged all the youngsters to join hands in eradicating the evil practice of using drugs. In his speech as guest of honour, Rongmei Naga Baptist Associate youth secretary AG Kasumpou encouraged the HIV/AIDs victims.

On behalf of his ministry, guest of honour AG Kasumpou donated some financial aid to district AIDs Control Officer Tamenglong for the welfare of PLHIVs.

In her presidential speech, district AIDs control officer Tamenglong Gaiduanreiliu Gangmei thanked all the participants.  She also expressed her gratitude to guest of honour AG Kasumpou for the big donation.

The day was also observed in Jiribam district at the conference hall of Jiri Ima Meira Paibi Apunba Lup JIMPAL, Babupara in a function organised by Child Welfare Ashram,