The Miyamgi Numit programme in Churachandpur district received a total of 112 queries/complaints of which, 48 queries were resolved on the spot.

Miyamgi Numit organised by respective district administration on Thursday witnessed low turnout in Tamenglong and Churachandpur though it was well attended by government departments in both districts.

The district administration Tamenglong organised Miyamgi Numit programme at the conference hall of Tamenglong Old Deputy Commissioner Office with the participation of as many as 29 government departments.

However, despite the strenuous efforts given to organise ‘Miyamgi Numit’ in remote district like Tamenglong so that the public can raise their grievances, few people or groups turned up till the filing of this report.

The hill people who suffer from many shortages and issues seemed unaware of the government programme.

“I take this solemn pledge that I will work for the emotional oneness and harmony of all the people of India regardless of caste, region or language. I further pledge that I shall resolve all differences among us through dialogue and constitutional means without resorting to violence,” he stated.

Meanwhile, in Churachandpur, the Hill Leaders Day and Meeyamgi Numit was observed at the Multi-purpose Hall, Mini-Secretariat Complex, Tuibong on Thursday. Deputy commissioner Sharath Chandra Arroju was joined by all district level officers, including SP Shivanand Surve; DFO, CEO/ADCC, all SDOs/BDOs and officers from other line departments at the event. 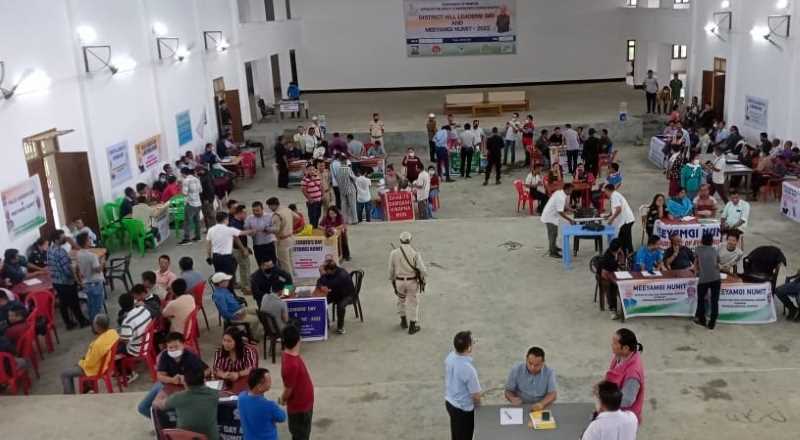 During the event, almost all departments of the district set up their respective counters. The vaccination programme and Health check-up counters set up by the Health department witnessed 24 persons being  administered vaccination while 16 persons were provided free medical check-ups.

A total of 112 queries/complaints were received, of which, 48 queries were resolved on the spot.

During the programme, deputy commissioner Churachandpur directed all concerned to expedite the disposal of all complaints received and submit action taken report/status of complaints by August 26.

Arroju also interacted with the people on a first come, first serve basis to ensure that weaker sections of the society, widows, differently abled persons get adequate opportunity for interaction.

The District Hill Leaders Day and Meeyamgi Numit is held every third Friday of a month but with the 3rd Friday of this month being a holiday, the day was held on Thursday.

However, the turnout was very low which may be due to reports that immediate redressal of complainants are allegedly not witnessed.

(With inputs from Churachandpur and Tamenglong correspondents)