Patriotic fervour filled the air as a massive rally, which was participated by thousands of students and people in the state, marked the observance of 57th Hunger Marchers' Day-2022 on Saturday in Imphal.

The Hunger Marchers’ Day (Chaklam Khongchat) rally was organised by the All Manipur Students’ Union (AMSU) in remembrance of the four students, who were martyred in the movement against artificial famine in 1965. 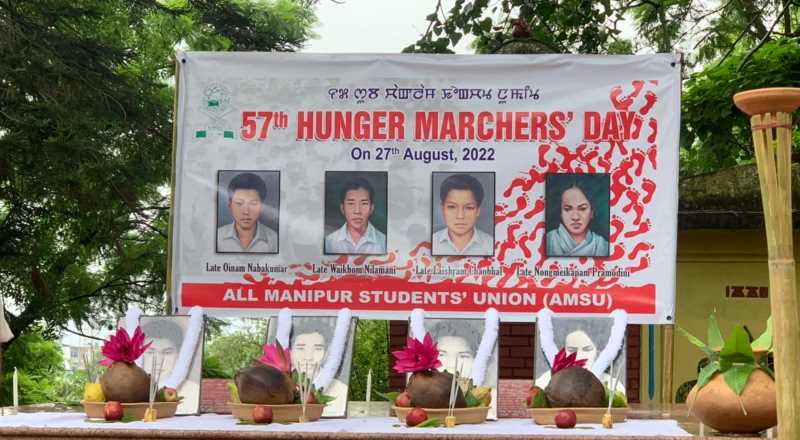 Speaking to the media on the sidelines of the rally, AMSU president Haobijam Chalamba cautioned that indulgence in politics in the distribution of fertilisers and rice under NFSA is an invitation for a second Chaklam Khongchat in Manipur.

The opening ceremony of the Hunger Marchers' Day 2022 began with the hoisting of AMSU flag at Pishum Ching Students Memorial Complex in Imphal West followed by floral and candle light tributes to the four martyrs at their burial site.

Later, thousands of students, some dressed in traditional attire, from different educational institutes from across the state took out a rally, which started from Pisum Chingamacha, Students Memorial Complex, Imphal West.

The rally culminated at DM University campus, Imphal West, where the formal function was held under the theme "Learn for Emancipation".

During the rally the students chanted slogan such as, “Long live, Manipur,” “We want, fully fledged ILPS,” “Minister MLA na Cheng Yenba Yaobiganu,” “Provide right to education to the poor” among others besides carrying the portraits of the four martyrs in four different Dollai. With a huge turnout for the rally, several office goers and other commuters enroute faced long traffic jam. 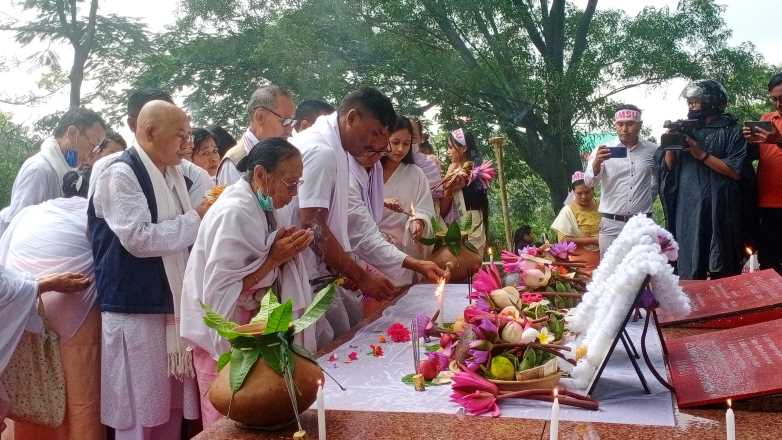 Chalamba said that indulgence in politics by some MLAs in the distribution of NFSA rice and fertilisers has been affecting society, especially the underprivileged sections.

The farmers are unable to harvest the standard amount of crops, thereby decreasing the state's rice productivity, he said, adding Manipur is used to depending on products imported from other states since the last few decades though the state was once self-sustainable in terms of food items.

"There is a doubt on whether the government is suppressing the move to make Manipur self-sustainable and encouraging importing of goods from outside states," he added.

Meanwhile, there has been a skyrocketing increase in the price of essential commodities in the state and it has become a factor for the labour classes to confine to only a single meal on a daily basis, he said.

Do not make all such aspects a reason for another Chaklam Khongchat, the president said, apprising the state government to frame a policy to make Manipur self-sustainable in food products and to facilitate the issues faced by the common people especially the under marginalised groups.

The day is observed every year in memory of the students who lost their lives while protesting with the demand to give rice caused by artificial famine in 1965. Since then the day has been known as “Chaklam Khongchat”.

A play entitled “Chaklam Khongchat” was also showcased at the Rup Mahal Theatre in Imphal West in the evening as a part of the observance.

The programme was also attended by various CSO and student leaders from across the state including the former executives of the AMSU.