The chief minister also distributed awards, trophies and commendations to police officers on the 130th raising day of Manipur police.

The 130th raising day of Manipur police was held at the Parade Ground of 1st Battalion Manipur Rifles on Tuesday with Chief Minister N Biren Singh as chief guest of the celebration.

During the function, the chief minister appreciated Manipur Police for their immense contribution in restoring peace and tranquility in the state and putting their relentless efforts to control drug menace under 'War on Drugs' mission initiated by the state government.

Biren said that police service is quite challenging by serving the state day and night without any fear. The law and order of the state has improved tremendously in the last four and half years and reaching this stage of peaceful atmosphere has not been an easy process.

The sacrifices made by police personnel during COVID-19 pandemic are also highly commendable, he added.

Stating about drug menace in the state, he said that Manipur police is putting their maximum efforts to eradicate the issue of drugs in the state. The department never compromised on the drug issue and action was taken up even against the cops who were involved in any drug case.

As a part of the programme, the chief minister also distributed awards, trophies and commendations to police officers on the occasion. 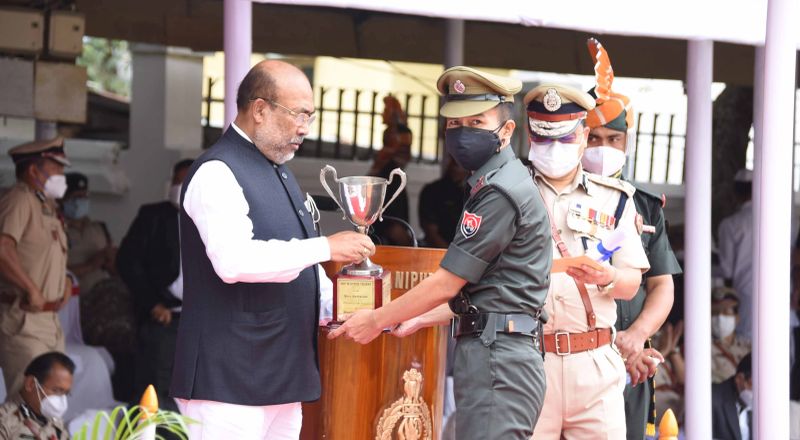 On the occasion, the chief minister released a souvenir highlighting the various achievements of the Manipur Police department in the last one year.

Meanwhile, as part of the 130th raising day of Manipur police, a ‘mega marathon competition’ was organised by Nungba Police Station. Around 60 individuals from the Nungba area took part in the mega marathon which started from Rengpang to Nungba Bazaar.