it is unfortunate to learn about the continuous construction of border fencing along Indo-Myanmar region despite various civil voluntary organisations demanding to halt it until dispute is settled, MPCC president K Meghachandra said.

He stated this in response to a query by media persons during felicitation of L Memo Singh and N Poppilal Singh for joining the Congress party. The programme was held at Congress Bhawan on Wednesday.

Taking the opportunity of the function, media persons had asked the stand of MPCC about continuation of border fencing construction along Indo Myanmar border area, which was reported in local media after their visit.

Addressing the media, Meghachandra said that it is unfortunate to learn about the continuous construction of border fencing along Indo-Myanmar region despite various civil voluntary organisations demanding to halt it until dispute is settled. MPCC has also been urging the authorities concerned for finalisation of the long pending Indo-Myanmar border pillar issue, the party president said.

But unfortunately, they didn’t receive any response from the state government till date. Nevertheless, the party will never give up the issue until it is resolved or settled, Meghachandra said, adding that they will relook at the latest development taking place along disputed areas of the Indo-Myanmar region. In accordance with it, further course action would be taken, he added.

Meghachandra said that with a vision to bring back Congress party in the 2024 Lok Sabha election, MPCC is set to conduct two days “Nav Sankalp Meeting”, a brainstorming session where resolution in various topics will be taken, in the state from today onwards. The meeting is already launched at Udaipur, Rajasthan from May 13 to May 15 and such a session has to be conducted in all the states of India as a directive of the All India Congress Committee, he informed.

Ex-MP Thokchom Meinya said that Nav sankalp Meeting of Chitan Shivir at Udaipur in Rajasthan, held from May 13 to May 15, has become a turning point for the country to re-strengthen the Congress party throughout the country to bring back the party in 2024.

He continued that Congress stands for inclusive India as the party believes in unity in diversity, secularism. With the advent of the BJP-led government in the country and Manipur, people are hit hard in many ways. There is an unprecedented price rise in essential commodities and unemployment and so on, the ex-MP said. 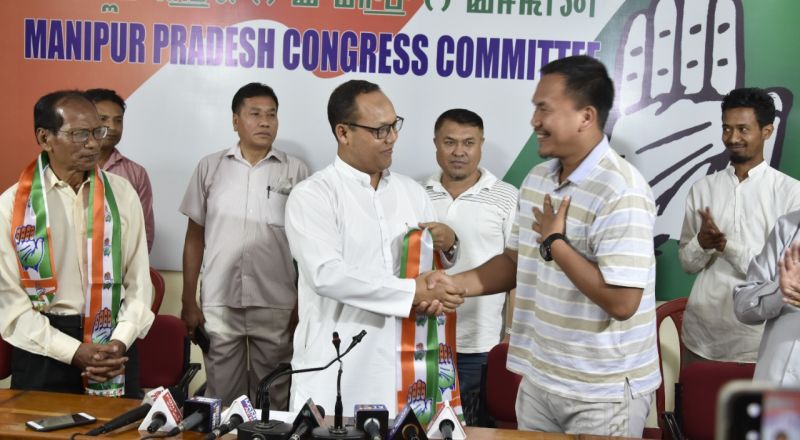 The newly joined party workers, L Memo Singh and N Poppilal Singh, extended their gratitude on being accepted as workers of the party. They assured to share their contributions in bringing changes in the state under the platform of Congress party.