The NFR has started installing advance warning systems for disasters such as landslides in all trains and railway stations in Manipur: Union MoS for Railways and Textiles Darshana Jardosh

Union Minister of State for Railways and Textiles Darshana Jardosh on Thursday announced that 50 per cent of the Imphal-Jiribam railway project has been completed. She said the long coach passenger service to Khongsang will be operational by September.

The Union minister was speaking to the media on various ongoing projects taken up by the ministries of Railways and Textiles in Manipur at Hotel Imphal in Imphal East.

She said that the Northeast Frontier Railway (NFR) has started installing advance warning systems for disasters such as landslides in all trains and railway stations in Manipur for the safety of passengers and officials. 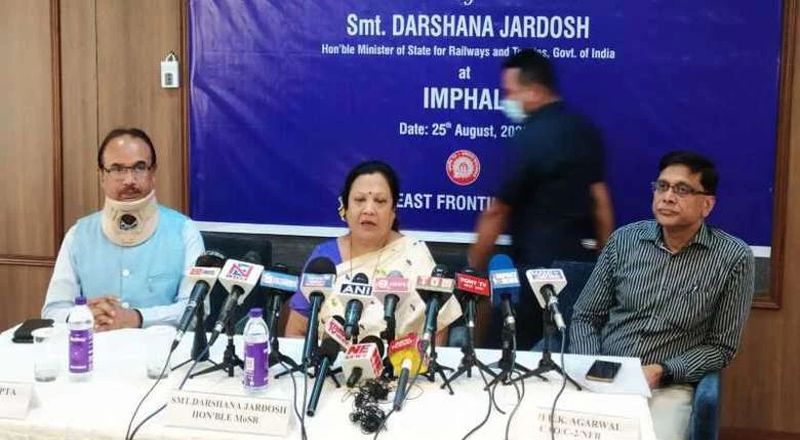 The development comes a month after the massive landslide that hit the NFR work site at Makhuam also called Marangching in Noney district. The tragedy claimed as many as 61 lives.

Elaborating on the safety measures, NFR general manager Anshul Gupta who accompanied the minister said the NRF has mapped all the weak point ranges along the railway routes and installed advance warning systems.

The warning alert will be received by train drivers, authorities and rest houses for any possible disaster, she said. Efficiency testing is underway and it will be functional within three months, he added.

The NFR is also planning to develop picnic spots and lodgings at all stations and other selected destinations along the railway routes in Manipur to boost tourism alongside connectivity as the railway reaches Manipur, Jardosh said.

“The double engine government is committed to give world class railway services to Manipur,” she said, exuding confidence that the development of such tourist spots will attract tourists as well as filmmakers.

The proposed tourist spots may be upgraded to the level of film locations as India being one of the highest film production countries, she added.

A low budget guest house for tourists will be installed on the first floor of every railway station in Manipur, Gupta said.

Picnic spots for both tourists and locals will be installed near some specific bridges and tunnels alongside the railway tracks and near stations having impressive landscapes, he added.

He mentioned that NFR has identified some specific bridges and tunnels for the spot and the idea has been shared with Chief Minister N Biren by the NRF team. He also mentioned that the NFR will be signing a MoU soon with the state government.

Concerning the proposed Moreh-Imphal railway service, he said a survey is in progress and final location assessments will be completed by January 2023.  Based on the sanction, the project is estimated to be completed by 2025-2026, he added.

The landslide tragedy of Makhuam/Marangching was due to the topography of the region, tempered by heavy rainfall and earthquakes, he said.

The NFR is now intervening in its ongoing works with geo-textile technology to prevent landslides and soil erosion from taking place, he added.

The Union minister spoke on the potential of India becoming the second largest producer of silk after Japan if the sericulture sector of Manipur is improved through modernization and training of farmers.

She acknowledged that there are three GI tag textile products in Manipur, and stressed the need to emphasis on those products for better export as GI tag products have high demands in outside states and overseas.

She highlighted the proposed Craft Handloom Village at Moirang in Bishnupur district which is to be constructed at the budget of Rs 30 crore. She further informed that the ministry had already allocated Rs 9 crore for the project.

Meanwhile, Manipur Chief Minister N Biren Singh held a review meeting on the progress of Jiribam-Imphal railway line in the presence of Union MoS for Railways Darshana Jardosh on Thursday and said that efforts are being made to expedite completion of the Jiribam-Imphal Railway line.

The chief minister said in another tweet that that despite the unfortunate landslide which happened near the railway project in Noney district and various other challenges, the entire team has been working relentlessly to expedite the completion of the Jiribam-Imphal railway line.