India is world’s largest producer and consumer of sugar

The country recorded over 5000 lakh metric tonne sugarcane production in sugar season 2021-22, and highest sugar exports of about 109.8 LMT.

India has emerged as the world’s largest producer and consumer of sugar. It is also the world’s second largest exporter of sugar, according to the Union Consumer Affairs, Food and Public Distribution Ministry.

The country recorded over 5000 lakh metric tonne (LMT) sugarcane production in sugar season 2021-22. Of it, about 3574 LMT of sugarcane was crushed by sugar mills to produce about 394 LMT of sugar (Sucrose). Out of this, 35 LMT sugar was diverted to ethanol production and 359 LMT sugar was produced by sugar mills. With this, India emerged as the world’s largest producer and consumer of sugar as well as the world’s 2nd largest exporter of sugar, the ministry stated in a release.

Another shining highlight of the season is the highest exports of about 109.8 LMT that too with no financial assistance which was being extended upto 2020-21. Supportive international prices and Indian Government Policy led to this feat of Indian Sugar Industry. These exports earned foreign currency of about Rs 40,000 crore for the country, the ministry stated.

The ministry attributes the success story of sugar industry to the "outcome of synchronous and collaborative efforts of Central and State Governments, farmers, sugar mills, ethanol distilleries with very supportive overall ecosystem for business in the country. Timely government interventions since last five years have been crucial in building the sugar sector step by step from taking them out of financial distress in 2018-19 to the stage of self-sufficiency in 2021-22".

As per the release, in SS 2021-22, sugar mills procured sugarcane worth more than 1.18 lakh crore and released payment of more than 1.12 lakh crore with no financial assistance (subsidy) from Government of India. Thus, cane dues at the end of sugar season are less than ₹ 6,000 crore indicating that 95% of cane dues have already been cleared. It is also noteworthy that for SS 2020-21, more than 99.9% cane dues are cleared. Government has been encouraging sugar mills to divert sugar to ethanol and also to export surplus sugar so that sugar mills may make payment of cane dues to farmers in time and also mills may have better financial conditions to continue their operations, the ministry further stated in the release.

The ministry pointed out that the growth of ethanol as biofuel sector in last five years has amply supported the sugar sector as use of sugar to ethanol has led to better financial positions of sugar mills due to faster payments, reduced working capital requirements and less blockage of funds due to less surplus sugar with mills. During 2021-22, revenue of about ₹ 18,000 crore has been made by sugar mills/distilleries from sale of ethanol which has also played its role in early clearance of cane dues of farmers.

Ethanol production capacity of molasses/sugar-based distilleries has increased to 605 crore litres per annum and the progress is still continuing to meet targets of 20% blending by 2025 under Ethanol Blending with Petrol (EBP) Programme. In new season, the diversion of sugar to ethanol is expected to increase from 35 LMT to 50 LMT which would generate revenue for sugar mills amounting to about ₹ 25,000 crore. 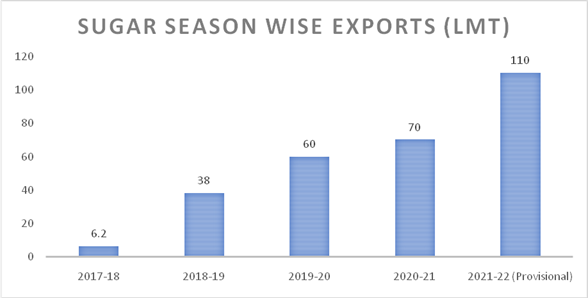 There is an optimum closing balance of 60 LMT of sugar which is essential to meet domestic requirements for 2.5 months. The diversion of sugar to ethanol and exports led to unlocking of value chain of the whole industry as well as improved financial conditions of sugar mills leading to more optional mills in ensuing season, the ministry added