The state of Manipur has countless fairs and festivals that are celebrated with great pomp and show, making it an unforgettable experience for everyone and anyone involved. However, beneath those great pomp and glitter are enormous amounts of wastes.

Besides food waste, single-use plastic is one of the biggest polluters in every fair or festival in the state. From drinking water bottles or single-use plastic plates to gifts wrappers, stage and venue decoration to shopping bags and cutlery, plastic waste accumulation in festivals is usually very high besides the normal day to day waste.

And with the government banning the use of single-use plastics, manufacturers and the public are looking for alternate means. 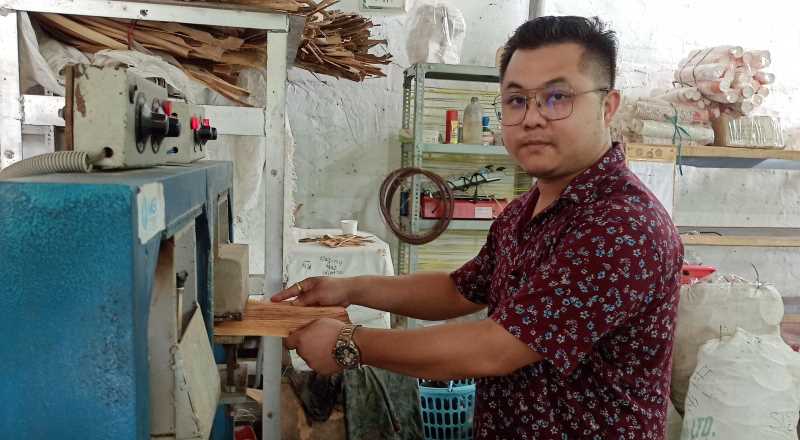 Using Areca leaves and nuts to make utensils materials like plates, spoons are not an easy task. However, the target of replacing plastic with few contributions is what makes an entrepreneur a success, Petermax Sharma Manoharmayum, an industrialist of MGR Phouoibi Container Making Industry said.

Looking back, he says, “I wanted to start an industry and was planning to begin one that involved making products that can create change”.

“While starting, I faced a lot of hardship as nobody was aware that my products could replace single-use plastic plates and spoons,” Petermax said. He himself went for supplying his products to shops, hotels, restaurants, fast food and even at markets, he said.

When his business was growing at about 78 per cent, COVID-19 pandemic came and the supply-chain system was broken, he said. Use and throw (single use) plastic plates, locally known as paper plates, were also made at his industry but it stopped as the government banned single-use plastics.

Explaining about the paper plates, he said the paper plates are laminated with thin plastic that may or may not be banned but since it is single use plastic, he stopped making them.

While Areca Cam is turning the areca leaf sheaths into spoons, boxes and plates as an environmentally-friendly alternative option to plastics, the items are biodegradable and that doesn’t mean they have to be instantly disposed of after one use.

“To make the items last longer depends on our manufacturing process or on the user’s care for the products,” he said and informed that, as of now, Areca leaves are transported from Jiribam and Kwatha. A bundle contains about 20 pieces of areca leaves at a cost of Rs 75 but it crosses Rs 100 when transportation charges and the likes are added, Petermax said.

“In the beginning, it was hard for me because it all depends on people. Sometimes they cooperate and sometimes they don’t. I tried to build a supply chain system and make people aware of the product. Usually, people neglect it because of the high cost of product,” he said.

“When I started out in 2019, it was very difficult to get buyers, because plastics was everywhere. Shopkeepers would object to my pricing plates at lowest, as disposable plastic ware was much cheaper,” said Petermax.

However, after the ban on plastics, demands from high class hotels, fast food corners are increasing, he said, adding that manpower and upgradation of machines are required to supply the demands. However, lack of financial assistance has prevented him to take more demands, he lamented.

Recalling how he did not sign up for Start-Up scheme 2020-21, he said he does not want to apply again as he felt different and thought that the Start-Up scheme was not based on innovative ideas.

Per day he makes around 2,000 spoons, 10,000 plates, 45,000 cups with the help of eight employees whom he trained after facing hardship for over a year. However, there is a need for more manpower as demand is increasing in the state, Petermax said.

“After starting the industry, for one and half year I searched around to buy raw materials and then supply finished items to six fast food corners. Now, I am supplying them to fast food corners, hotels, restaurants, foot path shops, over above 150 centres in all,” he said.

He said the ban on plastic has created a new demand, especially in the mass catering sector. In fact, there are days when it’s not possible to meet all the orders, he added.

“I learned a lesson of not to stop fighting to achieve targets”, Petermax said.

“Don’t just depend on government jobs. We all have our own creativity - pull that out and turn it into action. You will achieve what you want”, Petermax advised.

He also said a biodegradable plate or spoon or cup can be turned into fertiliser.

The ban on single-use plastic (SUP), which came into effect from July 1 of this year, has become a challenge for everybody in Manipur, from enforcement to lack of awareness among the public and availability of viable alternatives among others.

During field survey, items such as packaged drinking water bottle (less than 1 litre), plastic cups, plates and spoons, earbuds with plastic sticks, plastic straws, cutlery such as forks, plastic laminated cigarette box which have been banned by the Government under Manipur Plastic Policy 2022 were still found being used in rituals and feasts and available at shops despite the ban while a large chunk of shopkeepers and consumers still use plastic bags lesser than 75 micron thick for daily sales and purchase.

Indeed, there are cases where biodegradable options are expensive and the main reasons for high prices are limited demand. Many plastic substitute items are imported from other states or countries. Manipur would need a long-term plastic management strategy that suits its economy, budget, resources, and societal needs.