Four security personnel of Manipur Bharatiya Janata Party (BJP) president A Sharda Devi and one civilian were injured in a road mishap that took place at Joujangtek area, Noney district at around 9.30 am Tuesday.

The incident occurred when the BJP president escort vehicle in which the injured security personnel and the civilian were traveling to attend a one-day political conference at Nungba assembly constituency, collided with an ambulance on COVID-19 vaccination duty at Joujangtek. The ambulance was coming from Noney towards Toukuamjang village along Bishnupur to Rengpang road.

The injured were immediately rushed to a primary health centre (PHC), Noney. Later, they were airlifted to the Bir Tikendrajit International airport and were admitted at Raj Medicity, North AOC, Imphal, for further treatment. 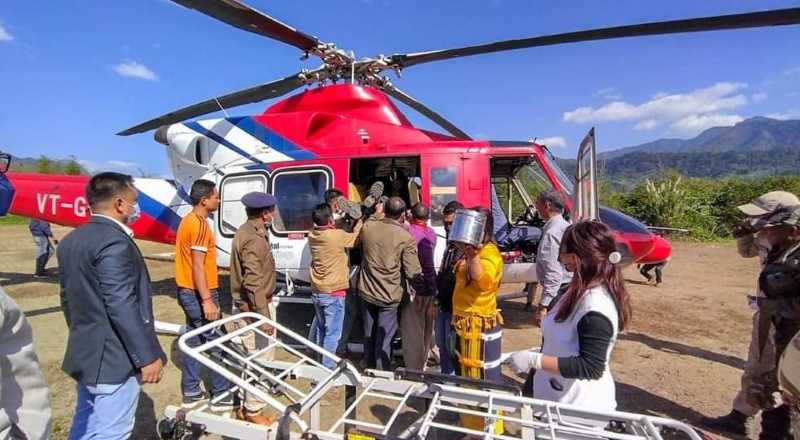 In the accident, the front portion of the security vehicle was extensively damaged while the front right wheel of the ambulance was partially damaged, police reported.

Hospital authorities reported that Sovachandra and Kumar have been admitted in the intensive care unit of the said hospital. Health condition of Sovachandra is critical as he received an injury right above the nose.

John and Milan are admitted at male general ward for further treatment; however, Yaima has been discharged.

According to BJP officials, three escort vehicles were given to state BJP president A Sharda Devi.  It is reported that three vehicles along with the vehicle of Sharda were passing a blind corner when the last escort vehicle collided with the ambulance.