Protest demonstration was held against the killing of Ningthoujam Rohit in poll-related violence, while BJP supporters laid out red carpet for Union Home Minister Amit Shah in Heirok..

The Union Home Minister addressed an election rally at Heirok Devi Mandop Lampak Heirok Part II amidst heavy security deployment. State and central forces were seen lining from the main highway leading to the venue where the election rally was in the wake of the protest demonstration. 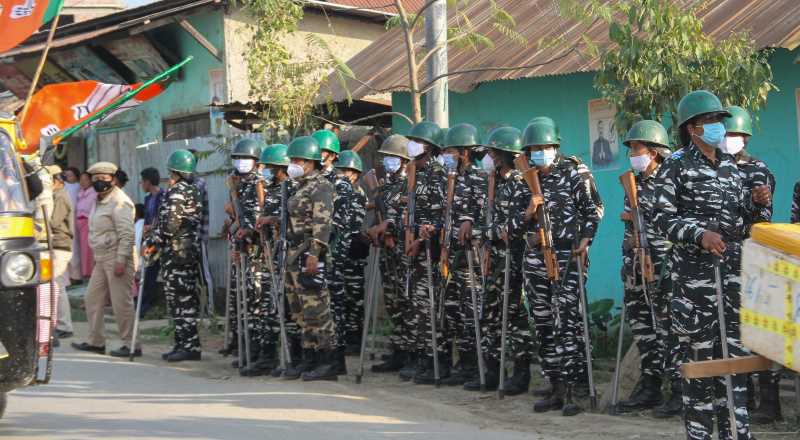 Protesters displayed placards and chanted slogans, “We demand justice”, “Killers must be Punished” among others as Shah’s convoy passed. During the rally, he promised to bring all militant groups for talks and bring lasting peace stability and development in Manipur.

“An innocent student was killed in Heirok owing to the failure of security apparatus to maintain law and order. Unfortunately, our Union Home minister is giving more importance to the election campaign instead of showing his concern for the safety and security of the people of Heirok living under constant fear”, said Roshan.

Late Rohit’s mother, N Leishabi said, “the police, as well as the judge of the case, has been neglecting the case and the public demand for justice. Till today no charge sheet had been submitted against the accused persons.”

“We only want justice. Please do what is right,” she appealed to the authority concerned.

Rohit, who was pursuing his BA 5th semester in Thoubal College, was shot dead by alleged supporters of Heirok constituency BJP candidate Th Radheshyam on the intervening night of December 21 and 22, 2021 after entering his home.

In connection with the incident, the Thoubal police arrested six accused persons, including the brother of the BJP candidate Th Radheshyam.