The child accidently swallowed a hair pin while playing at home around 11.30 am on May 23.

Shija Hospitals and Research Institute (SHRI) on Monday stated that a 2.5-year-old girl who accidentally swallowed a large metallic hairpin survived the ordeal, after timely medical assistance by SHRI on May 23.

After the child accidently swallowed a hair pin while playing at home around 11.30 am, the frantic parents rushed her to several hospitals in the city with complaints of sore throat, stated a release. With no hope in sight, one of the hospitals recommended surgeries to remove the foreign body, it stated. However, the parents did not want to cut open her stomach and remove it surgically. So they hurried her to SHRI at 6.40 pm, hoping to save her with non-surgical procedures, it stated. 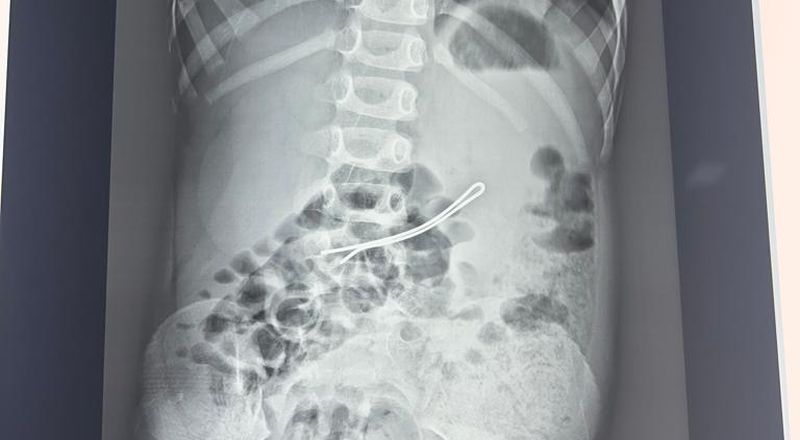 X-ray showing hairpin inside the abdomen

The initial investigation in the emergency room reported that the foreign body was in the duodenum, and the patient was immediately prepared for an endoscopic intervention.

It mentioned that the process of retrieving the hair pin was no easy task, as securing the hair pin with endoscopic forceps was tough. With due consideration of the risk involved, the SHRI team carefully but gradually retrieved it out of harm’s way, it further stated. The patient’s condition gradually improved with the treatment provided and was discharged from the hospital the next day in good physical condition, it stated.