‘Work to fill up vacant posts of assistant professors started’

The Democratic Students’ Alliance of Manipur (DESAM) on Thursday locked the office of the state department of Education (University) in their demand to fill up vacant posts of regular principals for 24 colleges and six aided colleges, and over 400 vacant posts of assistant professors. The police broke open the lock later.

DESAM also carried out a protest in front of the state department of Education (U) at Keishampat. On the sidelines of the event, DESAM president Leishangthem Lamyanba Meeitei told the media that DESAM has been demanding for filling up the vacant posts but more than 400 regular posts of assistant professor; librarians of 20 colleges and more than 1,000 non-teaching staffs of various colleges are still lying vacant. 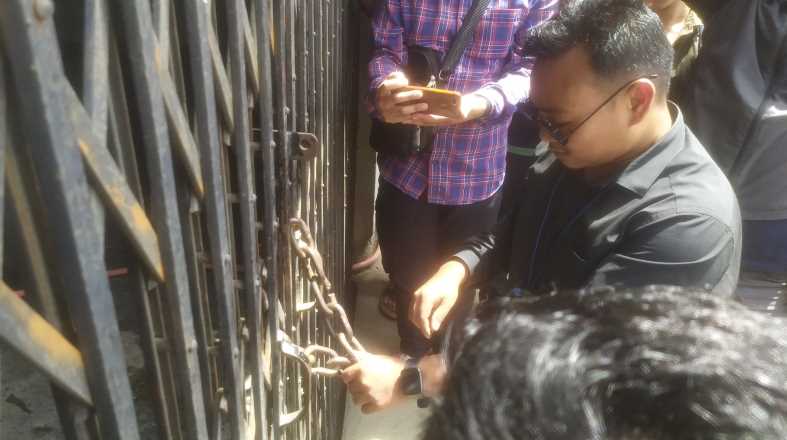 He said that the implementation of the National Education Policy 2020 will not be effective if the vacant posts are not fulfilled in time.

Intensified agitations will be followed if the government fails to immediately fulfil the demands, he cautioned. Later, a team of Manipur police broke the lock.

Meanwhile, deputy secretary (Higher and Technical education), Laishram Dolie Devi on Thursday issued a release, announcing that steps have been taken up as a way forward to the implementation of the National Education Policy (NEP), 2020 for filling up various vacancies in the department, including recruitment of 450 assistant professors for different subjects.

It stated that Education Minister Th Basanta has been taking up numerous steps, under the guidance and leadership of Chief Minister N Biren Singh to create a cohesive educational environment in all government educational institutes in the state.

One such meeting was held on Monday at the Directorate of University and Higher Education, Manipur where the director and principals including in-charge principals were present, it mentioned. All the issues relating to higher education were discussed in detail, it added.

Recruitment process of 190 assistant professors for various subjects on a contractual basis till the posts are regularly filled through MPSC is near completion, and have been referred to department of personnel as per the required procedure for declaration of results, it stated.

In order to meet the shortage of teaching staff, steps have been taken up to fill more than 400 assistant professors through the Manipur Public Service Commission (MPSC),” it further stated. Details relating to financial implications, identification and categorisation of subjects, category wise reservation etc. are being worked out to place it before the Cabinet, it added.

Recruitment of 182 Group C and D posts on contractual basis has also been taken up and referred to the department of personnel as per the required procedure.

Recruitment of 257 teaching and non-teaching posts of Dhanamanjuri University has been taken up and is being processed for approval to declare the results, it added.

Process has already been initiated for the recruitment of 22 regular principals of government colleges, and the department is currently preparing the requirements for sending requisition to MPSC after placing it before the state Cabinet for approval, the release added.

It mentioned that the department had in the past few years taken up the process of recruitment of 25 regular principals for government colleges through the MPSC twice.

“However, all the requisitioned posts could not be filled up due to the non-availability of eligible teachers as per the UGC Guidelines,” it stated.

For better administration of colleges, the government has already given the charge of principals in some colleges to newly promoted professors who are at par with the regular principals in terms of eligibility, it mentioned.

The department of higher education has been taking up various steps for accreditation of all government colleges in NAAC, it stated. So far, seven colleges have been accredited and steps also have been taken for the remaining colleges which are a requirement for receiving grants from various funding agencies, it added.