Organised by the Global Naga Forum (GNF), Nagas from different walks of life walked for over hundred kilometers under the theme and banner: “Naga Solidarity Walk: One People, One Destiny”.

From the Nagaland state capital, Kohima, to Tahamzam (Senapati) in Manipur, Nagas in large number, young and old, most of them in their traditional attires, walked for two days braving the monsoon rain and summer heat, exhibiting their oneness to tell the world that their destiny is one. The walk started on July 28 and culminated on July 29.

Organised by the Global Naga Forum (GNF), Nagas from different walks of life walked for over hundred kilometers under the theme and banner: “Naga Solidarity Walk: One People, One Destiny”. As they walked along the national highway the number of ‘walkers’ swelled. They were greeted with cheers, drinking water, food and banners carrying encouraging words.

Solidarity messages were presented by many Naga organizations, including the United Naga Council (UNC) at the Tahamzam public ground.

A leader representing Nagas in Myanmar, while delivering a solidarity speech at the Tahamzam public ground, stated that he stood and participated in the ‘walk’ “where Naga organizations and Naga people talked about one people and one nation”. He also said that it was a celebration in breaking regional ideologies and barriers. 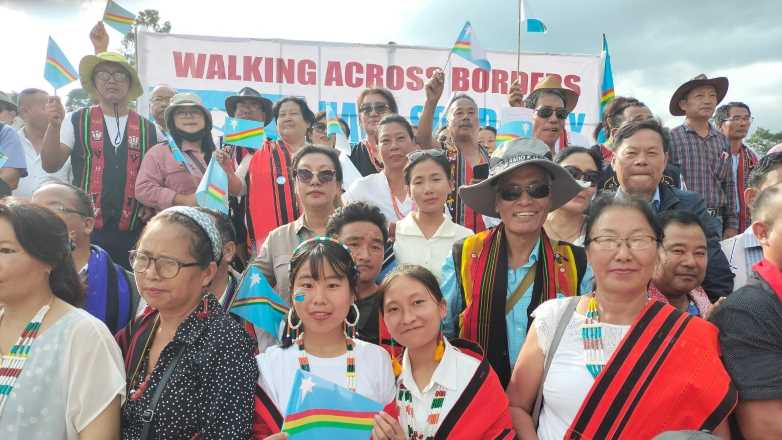 In her speech, Prof Rosemary Dzuvichu, co-convenor of Global Naga Forum said that they have started a journey for “our people”. “We named it Naga Solidarity Walk”, she added. According to the GNF leader, the Naga Solidarity Walk is a unity walk for all Nagas, a walk for a better future together as One People in an undivided ancestral homeland. Prof Rosemary also said that it was a walk for lasting peace and shared prosperity, without exceptions, throughout the Naga homeland, which, even today, lies divided in two countries -- four states in India and a province in Myanmar. “This we know is a gross violation of our human and indigenous peoples’ rights,” the GNF leader also added.

Prof Rosemary then said that the Naga Solidarity Walk may be described as a community celebration: Celebration of our beautiful and bountiful Homeland which has given birth to and nurtured generations of a free, brave, and generous people; and who in turn have produced the colorful and vibrant festivals and rich cultures that Nagas are known for in many parts of the world. Walking together these two days from Kohima to Tahamzan (Senapati), across Angami territory, Mao territory, Maram territory and Poumai territory, “was a way for us to emphasize the threat to our survival as a people, and therefore the need to reclaim, sustain, and grow our precious Naga heritage. It would be a real shame for Nagas of this generation to lose it all”.

She also stated that the choice facing the Nagas today is too real and clear to ignore. “So every Naga must ask oneself this question: Am I for the survival of the Nagas as a People with a precious salvageable heritage? Or with the small vested interest groups in Naga society whose main preoccupations are power and wealth?” she asked.

The GNF leader then said that the choice lies with each of the Nagas and with all of Nagas as a people. “Let me then restate what the Solidarity Walk is about in three short points: First, it is a Walk for peace and transformative change,” she also said.

According to Prof Rosemary, what they did yesterday and today was a hopeful physical enactment of Naga unity for an undivided homeland across the artificial barriers and boundaries put in our way by the powers that be.

“Second, let’s be clear about one thing. The Naga Solidarity Walk is not against other people; it is not anti-Indian or anti-Myanmarese,” she also stated. “It is pro-Naga rights of self-determination and for peace in our homeland,” Prof Rosemary also said.

“Third, we hope this positive community-based action will grow into a burgeoning journey for a brighter future for all Nagas. We invite every Naga to proudly exercise your right to walk in your God-given homeland, no matter what anyone may say to the contrary,” she added.

According to Prof Rosemary, vested interest career politicians and groups may ask why Naga Solidarity Walk now. “First, we won’t be walking for Naga Solidarity if we were united. The Naga Family is breaking apart from the stress put on us for too long from outside and from within,” she stated.

According to her, physically separated from one another and politically divided, the Naga family is growing farther apart and beginning to deny their own peoplehood.

“We are forgetting our common destiny. We desperately need to heal ourselves from the wounds and offenses we have inflicted on one another. It is true, the past doesn’t die; it continues to live in us. But we know the present is alive in us too, even more so, in the here and now. But Nagas are abusing ourselves and destroying the present that belongs to all of us together,” Prof Rosemary added.

According to the GNF co-convenor, the present the Nagas share wants to create a better future for the Nagas as a people. She said that the possibilities of that future beckon the Nagas to forgive one another and to bestow the gift of grace, which may not be deserved. She said this is the critical transformative choice the Nagas must make as individuals and as groups.

Prof Rose then said, “You can keep denying the fact, but the fact is Nagas are a people with a shared history, therefore a shared destiny”.

The second reason for the Naga Solidarity Walk is to honor the Naga ancestors by walking in their footsteps.

“Our Naga ancestors from multiple language and cultural families walked the length and breadth of their respective territories for hundreds of years, if not millennia,” she said.

“Then European colonialism and modernity arrived in these parts. And with that, colonial Britain and postcolonial India and Burma split up the Naga homeland for control of our lands and ancestors,” she also pointed out. Since then, thousands of Naga patriots have sacrificed their lives for Naga peoplehood, and generations of their families have suffered and experienced irreparable disadvantage and harm, she mentioned.

“We must honor their memory and turn their sacrifices into something beautiful, useful and admirable. May the Naga Solidarity Walk we set in motion yesterday and today contribute richly to a successful journey of Naga peoplehood in a thriving, undivided ancestral Homeland,” the GNF leader concluded her speech.