Panchayati Raj Institutes in Manipur imposed 48-hour total shutdown in areas under the jurisdiction of all Panchayats from Thursday 6 am.

Panchayati Raj Institutes (PRI) in Manipur have strongly condemed the alleged failure of the state government to release pending funds of Panchayat already sanctioned by the Central government. Vexed over it, they have imposed 48-hour total shutdown in areas under the jurisdiction of all Panchayats with effect from 6 am January 27 to 6 pm January 28.

The call for the total shutdown was announced using loudspeaker at every Panchayat areas, calling for people's cooperation to the shutdown call. The imposition of shutdown paralised normal life in the valley. Shops were closed and vehicles movement was blocked by burning tyres on the roads.

Manipur State Panchayat Parishad president Abdul Latif contended that the state government has been undermining the importance of local self-government. He pointed out that local bodies and people in rural areas are made to suffer as the government ceased funds sanctioned for the development of villages for more than seven-eight months.

In view of it, a meeting of representatives of 161 Gram Panchayats and 60 Zilla Parishads that was held at SIRD hall, Imphal East, DC complex, on January 20 had adopted several resolutions. 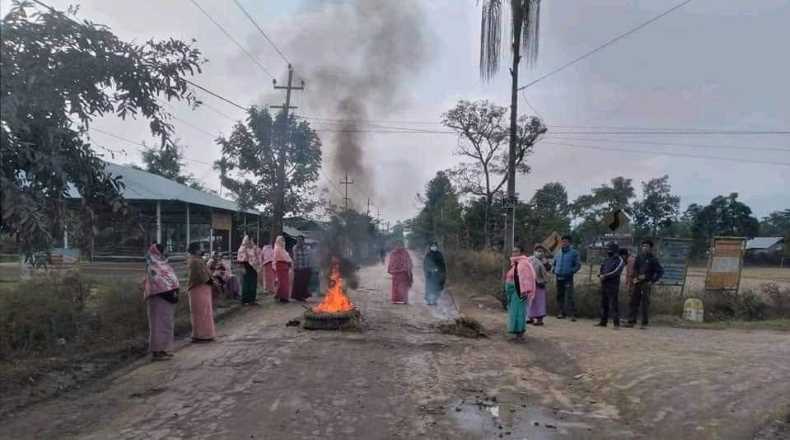 According to the meeting resolution made by the 161 GPs and 60 ZPs of the state, they decided not to take part in the Republic Day celebration. The meeting also resolved to make public/publicise non-disbursal of MGNREGA fund, three instalments of funds under 15th finance commission and the fund for 4th state finance award to the people residing in Panchayat areas on the night of January 26.

Moreover, following to the 48-hour total shutdown from 6 am of January 27 and sit-in protest staged from January 29 onwards in 18 CD blocks of valley areas, while cautioning that all the consequences during the total shutdown should be borne by the state government.

Following the failure to release the funds in time, utilisation certificates (UC) were not submitted on time. As such, there is no assurance that the funds for the next session will be sanctioned, Abdul pointed out, while condemning the state government for not fulfilling its assurance given on multiple occasions of releasing the funds.

The resolutions of launching the protest will be put into effect if the government does not release the funds meant for the Panchayats within January 25, he had cautioned.

It may be recalled that numerous agitations were launched in the past against the non-disbursal of funds for Panchayat.

The Centre’s flagship rural employment scheme has run out of funds halfway through the financial year, and supplementary budgetary allocations will not come to the rescue for at least another month when the next Parliamentary session begins.

According to reports, there was a negative net balance of Rs 10,310 crore as on December 2, 2021, according to MGNREGA’s financial statement on the online Management Information System. Rs 1,281 crore was due in unskilled wages, at a time when scores of workers are relying on MGNREGA as a last resort to earn a living in the face of huge employment loss across the country due to the novel coronavirus disease (COVID-19) pandemic. Out of Rs1,281 crore, 65 per cent of pending wages were from just three states — Manipur, Nagaland and Uttar Pradesh.

The beneficiaries are entitled to get wage payment within 15 days of closure of muster roll of the work, according to provisions under the Act. Payments worth Rs 8,686 crore were also due to the state in material and administrative components. Rs 73,000 crore was allocated for MGNREGA in the budget for the current financial year (2021-22), an 18 per cent increase in funds allocation compared to the previous financial year.