Villagers allege no prior notice as an eviction drive was conducted at Kangchup Chiru village, Manipur on Tuesday.

At least 11 people, including eight villagers and three police personnel, were injured in a clash that took place during an eviction drive conducted at Kangchup Reserve Forest Area at Kangchup Chiru village, Manipur on Tuesday. 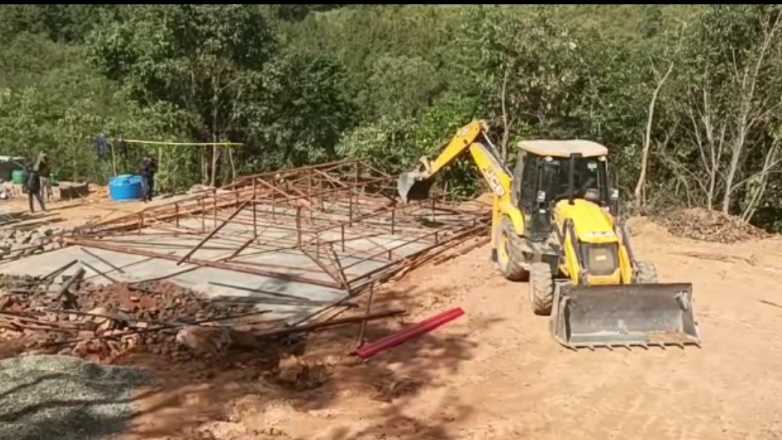 On December 2, divisional forest office of Kangpokpi Forest Division, Kangpokpi district had served an eviction notice to both the persons.

The eviction notice mentioned that they were constructing structures (unoccupied new structures) inside Reserved Forest without lawful authority, thereby violating section 26 (1) (h) of the Indian Forest Act, 1927 and rule 73 of section 76 (d) of Manipur Forest Rule, 2021.

It further mentioned that such unauthorised construction in reserved forest land is liable to penalty as prescribed in section 26(1) of Indian Forest Act, 1927 with imprisonment for a term which may extend to six months or fine or both and compensation for damage done to the reserved forest.

The notice directed the two persons to remove the illegal structures within three days of issue of the date of notification. If they failed to follow the notification within the said period, eviction proceedings will be carried out under rule 73 of the Manipur Forest Rules, 2021 and anything constructed or deposited on the Reserve Forest land shall be evicted and forfeited to the government and will be followed by legal action for violation of the Forest Act.

Locals of the Kangchup Chiru, decrying the eviction notice, demonstrated protest along the Kangchup road and blocked the road by burning tyres.

At around 10 am, when the Kangpokpi forest division came to start the eviction work along with the director of the state forest department and Kangpokpi district police, the protesters blocked them from starting the eviction work, giving rise to tension between the two.

To control the mob, police fired several rounds of tear gas shells while the protesters pelted stones in return.

In the incident, at least eight villagers were injured in which three villagers were evacuated to RIMS hospital, Lamphel for first aid. Besides, at least three police personnel were also injured.

Police personnel overpowered the protesters and controlled the mob. Later, the two houses were dismantled by the Kangpokpi forest division personnel with the help of an excavator.

Meanwhile, president of Kangchup Chiru Youth Club, JD Thonsing told the Imphal Free Press over the phone that such an incident might not have happened if the concerned authorities had served the eviction notice earlier. He alleged that the eviction work started without any prior information to the house owners.

He said the village authority had met Chief Minister N Biren Singh and requested the government to conduct land demarcation.

The villagers strongly condemned the forceful Act of eviction without prior notification, he added. It is reported that the injured have been discharged after giving first aid.