A first in Manipur, Paorei village celebrated Cosmo Flower Festival as a part of conservation efforts to enhance the beauty and economic growth of the place.

As autumn reigns through October, hilly Ukhrul in Manipur, Northeast India comes alive with the beauty of cosmo flower bursting forth in full bloom in riots of colours. It is truly a welcoming sight for visitors to the district. In a bid to promote conservation of this delicately enchanting Cosmo flower and boost the village economy, Paorei village organised the first-ever Cosmo Flower Festival in the state on Friday - October 14, 2022.

Paorei village is situated around 28 km away from Ukhrul headquarters. It is considered the oldest village in Manipur's Ukhrul district and is flanked by Longpi and Lunghar village in the east; Peh in the north, Ukhrul and Halang in the south and Talui in the west.

The Paorei Village Authority said the festival was initiated to promote the rich natural beauty of the village and enhance the economic condition of the villagers through cosmo flower conservation efforts. The festival also showcased vibrant traditional and cultural displays and performances.

“This festival will help promote domestic tourism, which will play a key role in enhancing the economy of the local people,” Sanatomba Singh, chief guest of the festival, said as he was given a warm welcome by the villagers at the occasion.

In the effort towards conservation and promotion of cosmo flowers, four localities of the village have started conducting cosmo competition where the most deserving locality is awarded, said Paorei village chairman Robust Pheirei. 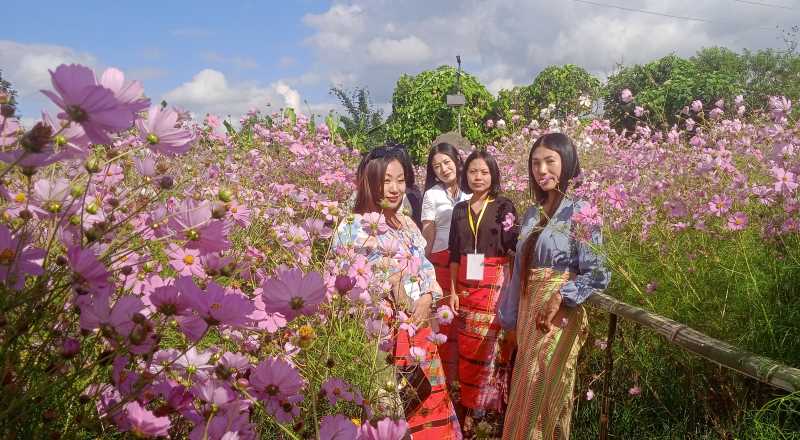 Nobert Khayi, joint electricity regulatory commission, also a member of MSPDCL and guest of honour of the festival, stated that the beauty of cosmo signifies peace, harmony and unity.

"If we are to bring holistic development, we have to shape and promote youth and give due importance to education," he said.

The village had also submitted a memorandum to state Minister Biswajit Singh for the construction of a "tourist house to promote tourism" in the village, which is a greater part of Phungcham, according to the Paorei village cosmo festival organising committee.

According to the oral history of Phungcham, a Longnao (group of people) migrated from Makhel village and rested at Longsam (resting place for Long) and dispersed at Mount Longathan (dispersing point).

The term Phungcham means old settlement in Tangkhul dialect. It is evident in the name of the village itself and various historical places that Tangkhuls who migrated from Makhel dispersed from this village to their present settlements.

Today, the village is well known in the district for its scenic beauty and the significance of its contribution to the history and folk culture of the Tangkhul tribe.

Many indigenous festivals such as Luira Festival (seed sowing festival) where every household prepares rice beer, sticky rice and other delicacies, Laa Khanganui (virgin beauty contest ad virginity test) of Luira phanit where the virgin dance is performed, Mangkhap festival observed after the completion of heavy ploughing, rice transplantation, with much drinking, feasting and merry making and Chumpha festival (festival of thanksgiving for the new harvest) is still celebrated in most of the Tangkhul villages.

This year, adding to the many festivals of the Tangkhul Naga tribe, Paorei village decided to hold Cosmo Flower Festival in celebration of the blossoms that attract birds, bees and butterflies. The festival also aims to revive the age-old Glory Day festival of the youth as ''Cosmos Flower Festival" and “promote domestic tourism”, the organisers said.

Paothing Vashum, former executive member, ADC Ukhrul, who attended the festival, said that youth in the region used to celebrate Glory Day in October with great pomp and gaiety. "While celebrating dignity of youth, we also take up various youth oriented activities. And, flowers are associated with youth, and hence the celebration of growing cosmo," he said.