Busójárás, the season’s main event other than the fancy dressing, is held in the town of Mohács.

The Hungarian Cultural Centre in India -- Liszt Institute organised the Hungarian Buso Mask Carnival (BuSHOW) as part of Farsang (carnival season) in Hungary, at the embassy premises in New Delhi on Monday. During this season, a range of events are held across Hungary to scare winter away and welcome Spring. These events are held mainly in the southern part of the country and its neighbouring countries like Serbia, Romania, Poland, etc.

Busójárás, the season’s main event other than the fancy dressing, is held in the town of Mohács. According to legend, the festival is held to celebrate two things. The first is a successful attempt by the people of Mohács to scare away invading Turks. The story goes that during Ottoman occupation, the local people were forced to flee the town and hide in nearby swamps. One stormy night, on the advice of an old Šokac man, one such group donned scary masks and returned to Mohács, frightening the invading Turks away – who thought they were demons. 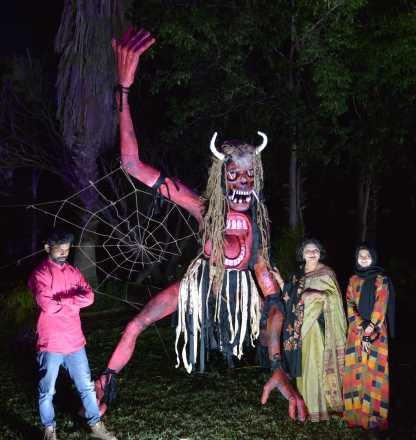 Today, the festival is held to scare away winter and celebrate the arrival of spring. In 2009, the festival gained a place on UNESCO’s Representative List of the Intangible Cultural Heritage of Humanity. Described as “more than a social event,” Busójárás was included for its social and cultural importance. The Hungarikum Committee added the Mohácsi Busójárás, a masked end-of-winter tradition to the Collection of Hungarikums in 2012.

This is the first time that the event has held in India. It was curated by eminent artist Neeraj Mittra who has been closely associated with the activities of the Cultural Centre for the past 20 years.

With participation from various Design and Art Schools from Delhi NCR like the Pearl Academy, IVS School of Design, Ivs, NIFT and Jamia Millia Islamia, the show brought the essence of Busó to Delhi in the real sense. And all the installations were made from waste! A dance performance by the Hashtag group was also held. 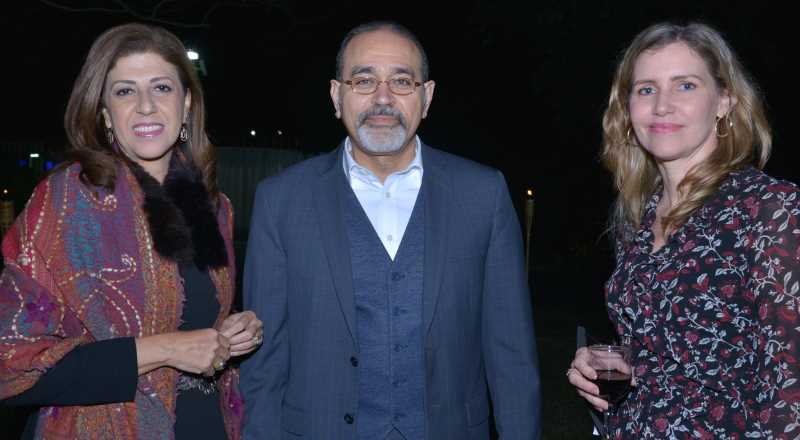 (Ambassador of Egypt with wife and Orsolya Bernat, Spouse of Hungarian Ambassador)

“Hungarian culture is more than 1,000 years old, enriched by historical exchanges with other countries. We are proud of this cultural heritage and the mission of our cultural centre is to promote these values: historical events, food and drinks, buildings, traditions, inventions or landscapes. A significant part of them, are considered Hungarikums – the collective term indicating the typically Hungarian attribute, uniqueness, speciality and quality of these cultural values.

One of these Hungarikums is the Busójárás. At this time of the year, Busós appear in the streets of Mohács, a small town in the southern part of Hungary and work hard to scare off the winter. We hope that these art works, photos and performances will take the Indian audience closer to Hungary and its culture,” said Dr. Mariann Erdo, Director and Cultural Counsellor at the Liszt Institute.

“I am honoured to be part of BuSHOW. As a curator I feel that it was a positive challenge to connect with upcoming creative minds as well as senior artists to bring life to BuShow. I feel the growth, I see evolvement, I see fusion …. The essence of the show is well received and executed by all the participants,” said Mittra.

Jose Kalathil is s senior journalist and can be contacted at kalathil.jose@gmail.com