The students staged a protest and alleged the director and the commissioner of Education (U) of being irresponsible and incompetent and further demanded their resignation.

DM University students under the aegis of the All Manipur Students' Union (AMSU), demanding that the varsity be upgraded into a full-fledged university, staged a sit-in protest on Saturday and threatened to launch intense stir if the matter is not addressed.

The students alleged the director and the commissioner of Education (U) of being irresponsible and incompetent and further demanded their resignation.

As DM University is unable to acquire the 12(B) status of the UGC, it is not receiving any funds from the UGC, thereby causing loopholes to exist in the functioning of the varsity, said secretary general of AMSU Bikramjit Thongam while speaking to the media. 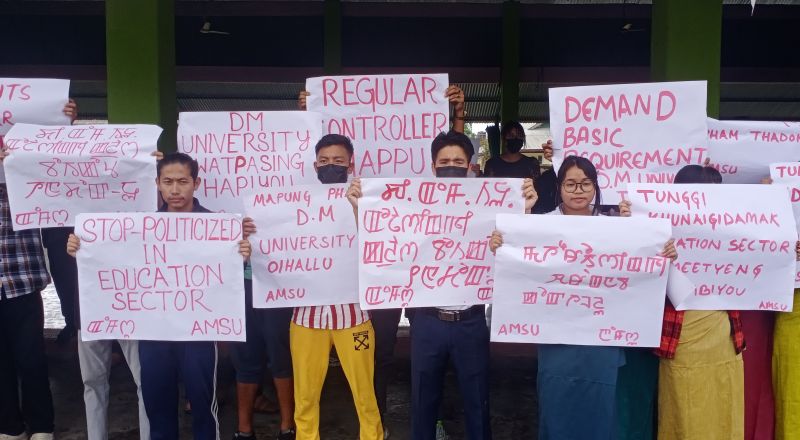 The varsity should have its regular staff in order to get the 12 (B) status; however, the only regular staff of the varsity is the vice-chancellor, he further said, adding, their remaining staff are all allocated from the Education (U) department.

“The DM University being unable to get the status of UGC 12(B) despite being functioning for four years is clear proof that the director and the commissioner do not bother about the varsity,” said Bikramjit.

Considering all these facts, it is the need of the hour to upgrade the varsity into a full-fledged university in the larger interest of the education sector and save the academic career of the students who will be the pillars of society in the future, he added.

The issue had been raised to the Education minister on May 14 and highlighted through the local media on June 19. But there are no signs of any positive steps being taken up from the side of the government, he said. He further cautioned of launching an intense stir during the forthcoming Assembly session if the government remains a mute spectator to their demands.