The 44 Assam Rifles under the aegis of 22 Sector of Assam Rifles IGAR (East) celebrated ‘Rakhsha ka Amrut’ with locals at its battalion HQ Tamenglong on Sunday.

Young girls and students prayed for long life and safety of their brothers in uniforms as the 44 Assam Rifles under the aegis of 22 Sector of Assam Rifles IGAR (East) celebrated ‘Rakhsha ka Amrut’ with locals at its battalion headquarter Tamenglong on Sunday.

“We are happy that our sisters from various parts of Tamenglong came to tie Rakhis. Even as we are far away from our families, these sisters did the needful by tying Rakhis,” said 44 Assam Rifles Commandant, Colonel Pradeepkumar, who led the battalion troops in extending their gratitude towards the locals for their love and support to the troops.

On the occasion, as the young locals tie Rakhi on the hands of the AR personnel, the latter pledged to protect and safeguard the countrymen always, he said, adding that the locals sang songs and shared their joy, happiness and trust with the troops. 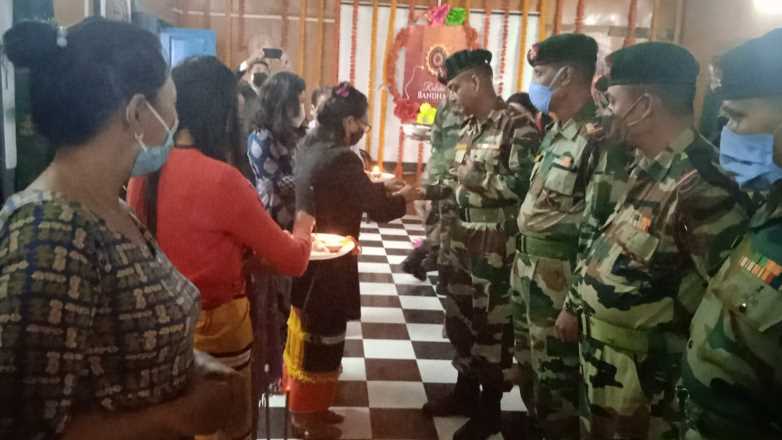 Similar programmes were also held at Dikiuram village in Tamei Subdivision where the unit has renovated the women centre, he added.

The event was aimed to foster brotherhood, inculcate feelings of oneness, and enhance the positive outlook of locals towards Assam Rifles.

The event was held as a part of ongoing Azadi ka Amrit Mahotsav to commemorate 75 years of Independence. Such events were organised by the unit at various other parts of the district, the commandant added.

Celebrated on the full-moon day of the Hindu month of Shravana (July/August), Raksha Bandhan festival celebrates the bond of love between a brother and his sister. On this day, sisters tie rakhi on the wrists of their brothers to protect them against evil influences, and pray for their long life and happiness.