Manipur Hills and Plain Contractors’ Association (MHPC) general secretary Ksh Rajen said the government has failed to sanction even 30 per cent of the work amount for the contractors.

The Manipur Hills and Plain Contractors’ Association (MHPC) on Thursday closed down the finance section and computer section of Public Works Department in protest against the alleged failure of the department to pay contract money, and declaring Works Minister Th Biswajit and Finance Minister, Deputy CM Y Joykumar as unfit, demanded their immediate resignation.

However, the works minister said the revised estimated amount was reduced due to the pandemic and the contract amount will be sanctioned from April.

General secretary of the association Ksh Rajen said the government has failed to sanction even 30 per cent of the work amount for the contractors; however, 100 per cent of most of the works have been completed for the year 2020-21.

Rajen was speaking in a press conference held at its office located inside the campus of PWD located at Imphal on Thursday.

Rajen said Rs 170 crore were sanctioned for the Works Department as budget estimate in the recent budget assembly session and Rs 90 crore was sanctioned as revised estimate for the department. Out of the sanctioned amount, a revised estimate amount of Rs 45 crore each for works carried at hills and valley was to be distributed, he added.

Rajen said that the chief engineer of PWD assured the contractors to sanction 30 per cent of the works that had been completed. The contractors when they enquired after 2-3 days of the recent budget session, the Finance department, instead of sanctioning the 30 per cent amount of the works, informed that there is no money to be sanctioned for the valley, he added. He enquired the department concerned how the revised estimated amount for valley became nil.

Rajen said since the last four years the government has been failing to sanction proper amounts for the contract workers. Rajen further added that the process of filing has remained idle instead of speeding up following the starting of the e-filing system which was introduced to speed up the filing process of the government. 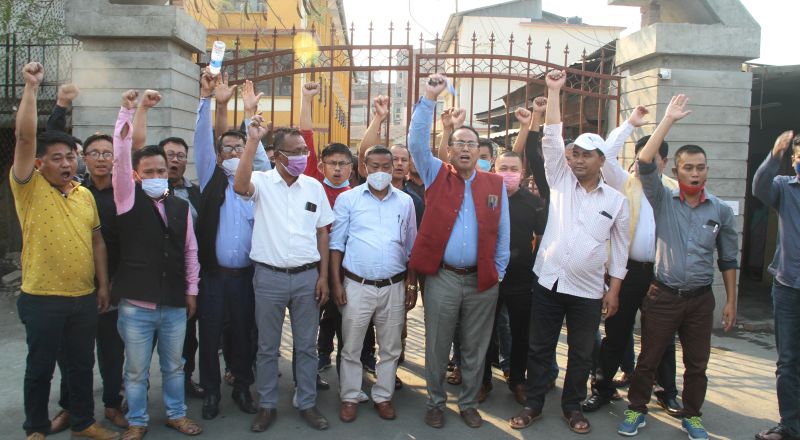 Later, the contractors raised slogans “works minister and finance minister should resign immediately,” decrying the activities of Works and Finance minister. The members of the association locked down the finance section and computer section of PWD in protest against its alleged improper functioning.

Meanwhile, Works Minister Th Biswajit said due to the pandemic not only the budget of the state but also the budget of the entire world has been affected. He said the contractors need to become aware of the budget for the PWD department before raising any sort of demands or agitations. The representatives of the association were asked to hold a meeting with the minister concerned but they failed to turn up, he said.

Biswajit said no financial work was carried by the officials since the lock down was imposed across the state. Works minister said for the year 2019-20, Rs 83.29 and Rs. 29.85 crore could not be sanctioned from the planning section and maintenance section respectively of the department due to the outbreak of COVID-19. He said for clarification, any contractor can get the details from the finance section through proper channels. 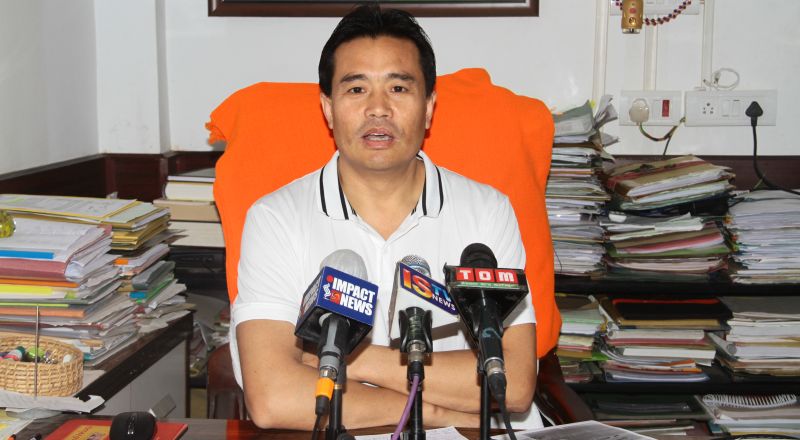 “As the situation of COVID-19 became intensified in 2020-21, about 50 per cent of the state budget for the department was reduced i.e. from Rs. 172.80 crore to Rs 90 crore. The amount was reduced in order to extend assistance to the people for the pandemic situation. From 2019-21, a total amount of Rs 220.728 crore could not be sanctioned. The pending bill amount could be easily sanctioned to the contract workers if there was no pandemic situation,” Bisawajit continued.

The works minister further said if the contractors’ association is willing to get proper information of the budget, they can come to get it from the department. The contractors need not worry as their money will not get lost. However, the pending amount will be sanctioned from April, he added.

Responding to the media, Biswajit said the association can get the budget information through e-kuber app anytime.