Thabal Chongba: Dance with a purpose

IFP Editorial: The yearly ritual of Thabal Chongba is not just about holding hands and dancing. 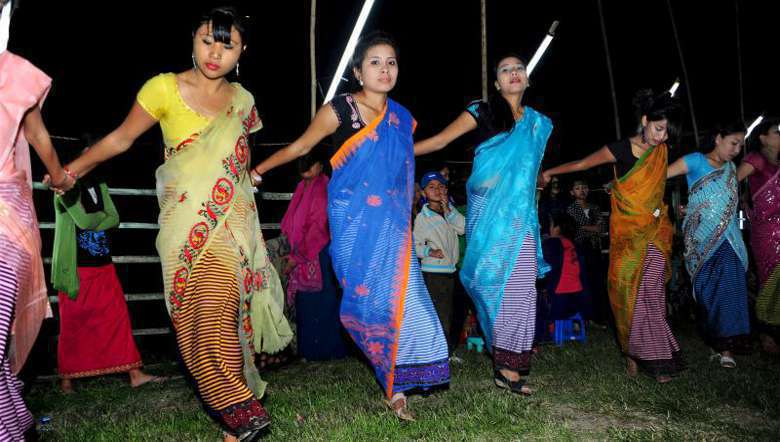 What is Thabal Chongba and what it means for the Manipuri society? One often tries to get away with the simplistic description of a popular folk dance during the annual Yaoshang Festival and by even a literal definition of Thabal chongba as ‘dancing by moonlight’. Why do humans dance?

According to a scholar, Dance is the movement of the body in a rhythmic way, usually to music and within a given space, for the purpose of expressing an idea or emotion, releasing energy, or simply taking delight in the movement itself. One of the most basic motives of dance is the expression and communication of emotion. People often dance as a way of releasing powerful feelings, such as sudden accesses of high spirits, joy, impatience, or anger. These motive forces can be seen not only in the spontaneous skipping, stamping, and jumping movements often performed in moments of intense emotion, but also in the more formalized movements of “set” dances, such as tribal war dances or festive folk dances.

For those who came in late, Thabal Chongba is a folk dance with a purpose for the Manipuris. It serves as one of the socially sanctioned forms of courtship between adolescent boys and girls, with roots in the creation myths and fertility rites of yore. Being a conservative society, courting is usually allowed at the girl’s home under parental supervision. Yet, socially sanctioned spaces are also created for boys and girls to meet and get to know each other. Thabal Chongba is one such space which continues till today although the forms and settings have evolved. But, it is always under the watchful eyes of the brothers and mothers as it is always held at the locality of the girl. It merely coincides with the Yaoshang festivities, the Manipuri Vaishnavite version of Holi. The only other occasion existing till today albeit only in some rural areas is ‘Likkon-Saanaba’ where young boys and girls gather for a game of dice. Perhaps it is because of the stars, adolescent urges to understand members of the other sex begin to develop in the Meitei month of Lamta as a prelude to the onset of the creation festivities like Lai Haraoba season in the month of Kalen. Every youth has gone through this phase and no one had bypass it. Thabal Chongba is one such occasion where the adolescent urges or itch is channelized ritually through a merry dance. It is not just of holding hands and dancing away the night with gay abandon.

It is in this background that we would like to discuss the state government’s ban on Thabal Chongba and Yaoshang Sports this year, as against the possibility of a second wave of Covid-19 pandemic in the state. An order issued by the state chief secretary stated that no activity involving person-to-person contact such as ‘Thabal Chongba’ or ‘Jatrawali’ shall be permitted, although ‘Yaoshang sports’ may be organised subject to observation of relevant SOPs. The order stipulated that the festivities of Yaoshang are likely to increase human interaction and physical contact which is not conducive to the second wave of COVID-19 infection being experienced in some states. What one must keep in mind is, this is the second consecutive year we have banned the Thabal Chongba ritual or festivities. It means bottling up the itch or adolescent urge for another year and it could most possibly lead to negative social situations which we all would want to avoid. We have seen in the past, explosion of negative sexual behaviour among the youth as a result of extreme forms of restrictions and conservatism. Yes, we understand the possibility of second wave of Covid-19 is very much there. But, one cannot adjust the yearly alignment of stars and its effects on the human urges.

So, the time has come for us to develop a contact-less form of Thabal Chongba to meet the safety requirements of the pandemic. After all, the yearly ritual of Thabal Chongba is not just about holding hands and dancing. Remember, Rajshri Baghyachandra fashioned the famous Ras Leela dance based on our creation dances like the Maibi Jagoi and Lai-haraoba Jagoi. So, let us bank on the creativity of our youth for a change.