How to run a university without teachers

IFP Editorial: Heading a university is not all about having the required administrative experience, but more of providing academic leadership to the institutions. 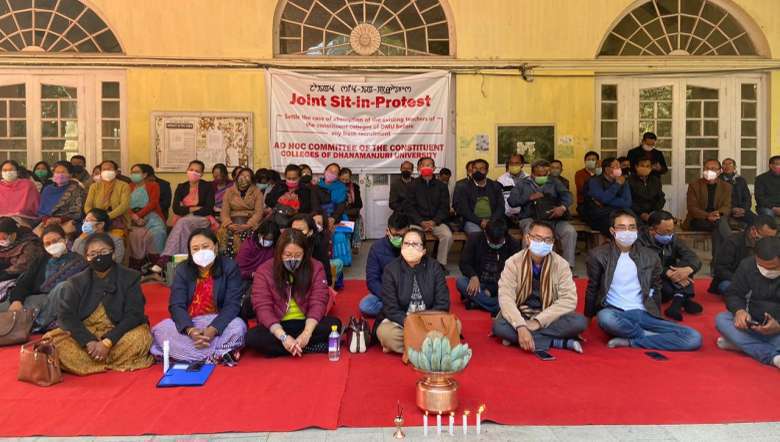 Well, that is about running universities without a proper academic leadership. The emerging story is about running a university without a faculty of its own. DM University came into existence in April 2018 under The Dhanamanjuri University Act, 2017. The University was established under the National Scheme of Rashtriya Uchchatar Shiksha Abhiyan (RUSA) as fulfilment of one of its primary components i.e., to convert colleges to cluster Universities. The University is built up of the three Dhanamanjuri Colleges namely DM College of Science, DM College of Arts, DM College of Commerce along with GP Women’s College and LMS Law College. Two years have gone by and its first batch of degree holders both Bachelor and Masters are set to roll out after finishing their semesters. It is in the grapevine that, DM University is planning its first Convocation soon. However, a recent news-item about the teachers of the five constituent colleges going on a joint sit-in-protest jolted us awake from the dream run of a state university after Manipur University became a Central University.

We became aware that for the last two years, DM University has been running without a faculty of its own, but with borrowed teachers from the Department of Higher Education and it is yet to be fully recognised by University Grants Commission (UGC) as a full-fledged university. Recently on December 19, the university authorities came up with a notification for appointment of 88 Assistant Professors spread across 22 disciplines or subjects. We thought, at last DM University is going to have a faculty of its own now. Then, complications came up regarding the fate of the students who were taught and examined by the borrowed teachers who has come out with degrees from the state university. For a university which began in 2018, a regular faculty is going to be recruited in 2021 only. What about the intervening period of two years which has gone by? The university authorities or for that matter the state government has to come clear on the status of the ‘borrowed’ teachers vis-à-vis DM University before any new recruitment in faculty positions is made, not for the sake of the teachers but for the fate of their products meaning the graduates and post-graduates rolling out from the university.

There might be other issues which we are not aware of. But, we are sure there will be plenty of unresolved issues. Yet, one thing is certain. The problem smacks of a misadventure by certain bureaucrats who in their hurry to become ex-officio Vice Chancellors had thrown the cardinal rules and procedures of establishing a university. Tragedy is, they had hoodwinked the political leadership in their unqualified ambition.

‘Academic council of MUC must think for students’ future’