In a conversation with the Imphal Free Press, the international footballer shared her experiences in the Rangers FC.

For better promotion of women’s football and finding a bigger platform, international footballer Ngangom Bala on Monday expressed the need for starting women football leagues in the country like that of Indian Super League (football league) which is being organised for men.

Bala, was awarded All India Football Federation women footballer of the year in 2014, 2015 and 2020 and she is the lone female footballer in the country to have played for foreign football clubs.

Bala has completed a 16-month contract with Scottish Women Premier league club Rangers FC and she returned back to the state on July 24.

In a conversation with the Imphal Free Press, the international footballer shared her experiences in the Rangers FC.

She said there are not many differences in terms of skills between the women footballers of the state or the country with that of the foreign clubs she has faced and seen. 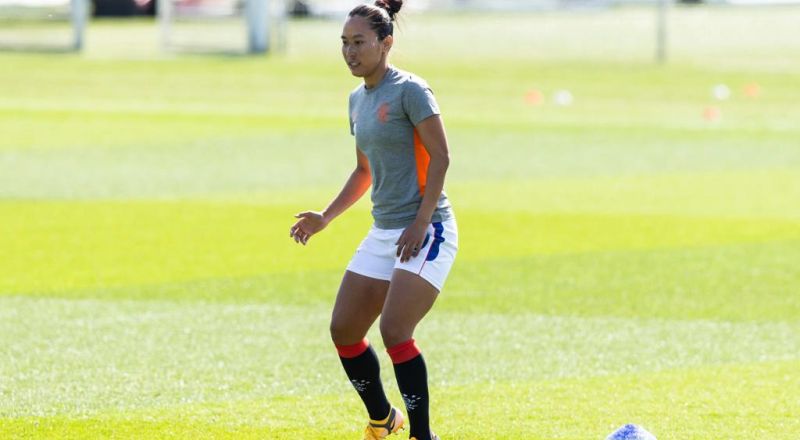 Bala said she found it difficult to adapt with the fitness level with other players and environment during her initial stage at Rangers FC. However, she managed to adjust and overcome all those in a short time.

Bala said the difference is that the players are made to play regular matches throughout the year, and they are made to undergo high intensity training even if the training is for a short time. In doing so, the fitness level of the player increases and the players gain more confidence. Even people may have observed that not all the foreign players including male footballers are skilled and talented, except for a few exceptional players.

The training in the foreign countries starting from the grass root level is done with a long term vision, she added.

Explaining her observation on how the players are groomed, starting at a young age in the foreign countries, Bala said that Rangers have younger teams starting from players around 10 years of age in which they are given continuous training until they attain the age to get a selection in the senior teams.

Bala also said that regular tournaments and leagues are also being organised for the grass root level and the junior teams. “We also have grass root level trainings here in the country or in the state. However, the training would last for a few months and be discontinued,” she added.

She said organising training camps just for a month or two before tournaments and discontinuing them at the end of tournaments will not be very effective and will not be much useful for the players in the long run.

She suggested that the players after the training should be guided to next steps for their future and frequent tournaments or leagues should also be organised for them.

Bala expressed the importance of organising regular tournaments from grass root level to the seniors level throughout the year so that the players can improve their skills and also maintain their fitness.

“There is enormous support from the fans or the supporters during the plays in Rangers FC. Even kids would be seen wearing jerseys and watching our match,” she added.

Expressing the need for international exposure, Bala said she has gained enough knowledge and skills during her 16 months contract with Rangers FC. “At present, my focus now is to stay fit and maintain it,” she further said and expressed that she idolised Christiano Ronaldo for maintaining his fitness and skill.

Bala said that there is a scope for rising women football players in the state to take it up as their profession, represent the state country and even play for foreign clubs.

Bala said, “I feel lucky and I am blessed that I could become an example for many upcoming footballers, I hope I can be an inspiration for many youngsters.”

Bala said she is the only player to have signed an 18-month contract with Rangers FC and besides, the contract has been extended for another six months.

“As far as I know, other players in the club were signed for a maximum of one year," said the Rangers player.

Regarding her plans while staying in her home state, Bala said, “I want to spend some quality time with my family and also take care of them since I have been away for more than a year.” The footballer said she has no concrete decisions and has not thought about a specific age to retire as of now.

ALSO READ: It’s a dream come true for me, I thank the billion prayers of all Indians: Olympic medallist Mirabai Chanu

At the age of 12 she started representing the state in Under 19 in 2002, and she was awarded as the best player of the championship. In the same year, she was also selected to represent the senior team of Manipur in the National game at Hyderabad under Moirangthem Ratan as the coach.

Acknowledging her contribution, she was also appointed as a constable in Manipur Police in the year 2010. At present, the state government has promoted her to the rank of inspector.

Bala started representing the country in 2005 and continues to contribute for the country. She led the Indian women team as a captain from 2015-2018. She also played for New Radiant Sports Club, Maldives for one month contract, scored 26 goals in six matches as the top scorer and she was also awarded as the best player.