A bomb blast occurred on Saturday at around 6:55 pm at De Khunai Resort, a lodging hotel which is owned by the MCM president.

The Meitei Council Moreh (MCM) imposed shutdown in Moreh on Saturday night after a bomb blast occurred on Saturday at around 6:55 pm at De Khunai Resort, a lodging hotel which is owned by the MCM president.

The blast damaged some portions of the building and window glasses were sprinted but no human casualties have been reported.

Just after the bomb blast, a team of Moreh police and personnel of 43 AR rushed to the spot where ASP M Amit, OC Kh Dilipkumar, CDO, OC Robindro conducted necessary procedure to nab the perpetrators.

Denouncing the bomb blast, a sit-in-protest was held on Sunday at Moreh bazaar where people from different communities, Meira Paibis and leaders of different CVOs took part holding placards saying ‘We condemn the bomb blast’, ‘We want peace’, ‘Do not disturb peace and harmony of Moreh Town’ and others. The protest rally was also taken out starting from Moreh Bazaar and marched through Gate no. 2, Muslim Nagar, Turel Wangma Leikai and concluded at the Moreh Bazaar. After the rally, leaders of different CVOs and Meira Paibis held a meeting at MCM office. 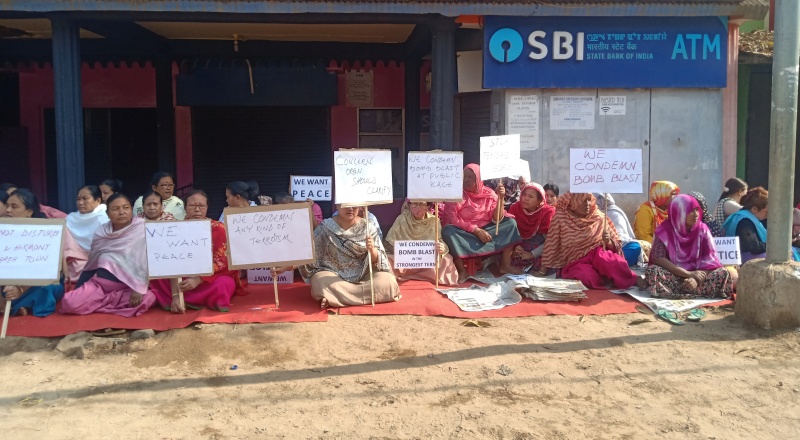 The joint CVOs also said that an intense agitation will be launched if the perpetrators fail to clarify within the stipulated time and also urged the law enforcing agency and security forces to take up necessary steps to arrest the individual and punish according to law of the land.