The endangered Himalayan Newt found at Jaimeng wetland was categorised under the endangered species by the Wildlife Protection Act, 1972.

Rich is the land of Manipur that several species that have become rare and endangered form a part of its biodiversity. The endangered Himalayan Newt (Salamander) (Himalayan Crocodile) found in Jaimeng wetland of the state is on the verge of extinction due to the destruction of its biological habitat, transformation of natural habitat and changing climate variability.

The Himalayan Newt, which scientific name is Tylototriton verrucosussis, belong to a subfamily called Pleurodelinae of the family Salamandridae. Considered one of the most primitive species among living Salamders found at Jaimeng wetland, Kangpokpi district, it has now become endangered.

This endangered Himalayan Newt found at Jaimeng wetland was categorised under the endangered species by the Wildlife Protection Act, 1972. It lives in water and wetland areas but the landscape of Jaimeng wetland is facing various conservation problems, including interference from outside the wetland and human activities on the fringe. 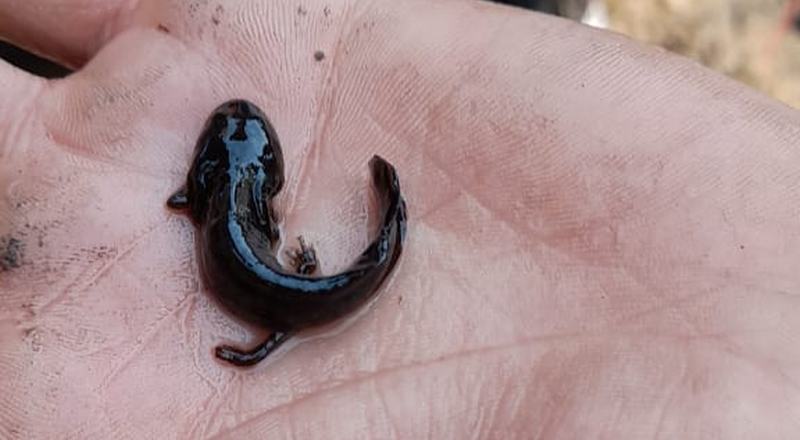 While this IFP reporter visited the Jaimeng wetland, it took three hours walk to cover the entire area. That is 4 km on the eastern side of Thonglang Akutpa village.

The estimated height of the wetland is 2215 metres above sea level. If not the highest, this could be one of the highest lakes in Manipur. The lake is at a distance of 4 km from Thonglang village located on the eastern side of the village which is about 22 km from Kangpokpi (NH 2 formerly NH 39).

Its total area measures about 3.51 ha, 69.75 ha of wetland catchment, according to the directorate of environment report.

Talking about the history of the Jaimeng wetland, Chawankining former village authority’s son Wisubou Charenamei said that the name of Jaimeng means ‘puzzle’ lake (Jai means lake, meng means puzzle) in Liangmai dialect. It is given by their forefathers who lost their way in the vicinity of the lake and could not find their way out as they kept returning to the same spot around the lake. About 30 years ago, the lake used to be surrounded by well-trimmed Kalakbang (Leihao or Michelia champacca), Maga (Uningthou or Phoebe hainensenia), Zameng rapen (Uthambal or Magnolia), and Karangbang (Thangji or Quercus sp.) The greater part of the Jaimeng wetland is basically a marshy mass of thick grass like weeds, mixed with reeds and green mosses.

He said Thonglang village is one of the historically important villages in Zeliangrong Naga history. It is one of the oldest villages recorded which has survived through the ravages of time till today after the dispersal from Makuilongdi (the ancestral home of the Zeliangrong people). The lake is said to be very deep. The approach portion of the lake is covered with a soft carpet of rare white moss and grass.

According to the belief of the locals, the lake is guarded by two unseen birds that cleanses the lake thereby no leaves or dirt is ever found in the lake. It may be noted that Jaimeng Lake is the catchment of two important rivers of the state namely, Irang river in the western part and Imphal river on the eastern part.

Wisubou said throughout the year there is a thick vegetation and lush growth of thorny bamboo (Liangmei, literally Chaki/ Manipur, literally Laiwa), lakeside breathtaking scenery with trees decorated with green lichens, presence of rare endangered high altitude amphibian salamander called Takope (Liangmei dialect) in the lake. In the warm season the lake is filled with Crocodile Newt along with white moss and grasses.

According to the Directorate of environment report, Jaimeng wetland is recharged by rainwater from the small catchment area of surrounding hills. Thus the maximum water level of the wetland is determined by the annual rainfall. There is a regular pattern of increase and decrease of water level based on the beginning and end of seasonal rainfall. The water level changes from lean season to peak season, about 2m.

Wisubou said that even though the lake acts as the source of water for Irang River and Imphal River; environmental services rendered by the lake have been discovered lately. Most of the valuable trees and wild animals in and around the lake have been wiped out due to anthropogenic activities. The surrounding of the lake is now bare and open. The water level of the lake has receded so much that the rare Salamanders may be parched to death. 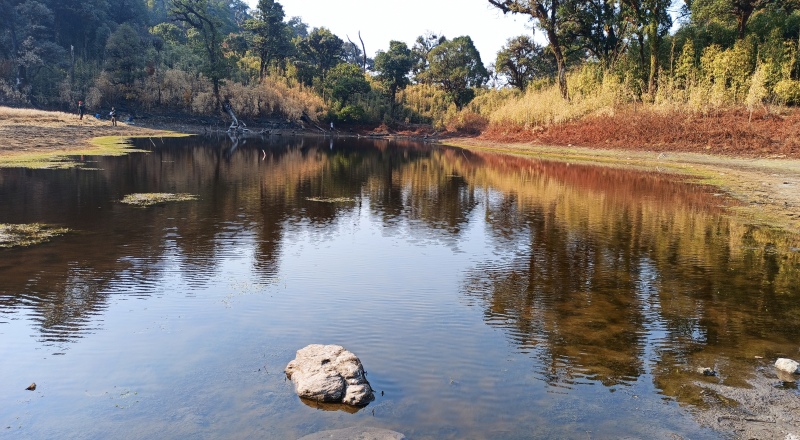 According to the case study report on Himalayan Newt at Jaimeng lake, 2018, presently, the result of climate variability and change is disturbing the ecosystem services of Jaimeng Lake. Himalayan newt is showing sign of vulnerability as a result of climate change. Deforestation is causing forest fragmentation and loss of habitat which may lead to the decline of floral and faunal diversity in the vicinity of the lake. The disturbances of environmental factors imbalances the natural climate leading to global warming by increasing the carbon dioxide level and decreasing the oxygen percentage in the atmosphere. At the landscape level, environmental impacts generally occur in the form of alteration of land features and fragmentation of biological habitats leading to isolation of floral and faunal population. Fragmentation of habitat into smaller patches may limit animal mobility leading to loss of available habitats in the surrounding environment.

The Wildlife (Protection) Act, 1972 listed the Himalayan newt under the endangered category only to protect the animals against wildlife trafficking.

A joint council of three villages namely Bena Lun Phom (BLP), had positively responded to the call for nature conservation by adopting a firm resolution to protect the surrounding forests of Jaimeng Lake and wetlands 10 years ago.

Wisubou, representing the joint council, appealed to the concerned authority, particularly the Forest Department and it is environmental wing, to take up appropriate steps to bring the Jaimeng Lake under the ambit of the National Wetland Conservation Programme. And construct the road to reach wetland easily at least until Bebapusom (waiting shed located between down village to wetland area).

The plantation of potato, poppy and cabbage cultivation has been restricted in the surrounding area of 3 Km of the hill slopes from the lake for rejuvenating the forest by BLP. It appealed to the State Government to provide an alternative arrangement for the villagers to sustain livelihood for the villagers.

The BLP also demanded the concerned authority to give an appropriate legal status under the provision of the Wildlife Protection Act, 1972 or any relevant Act enforcement in the country which will help in reversing the impending colossal impact on global warming or climate change.

He said the conservation of endemic species Himalayan Newt can be the greatest endeavours of the villagers. To conserve the endemic species, a research study is required to find out ways to help conservation of wildlife. The Jaimeng Lake may become a tourist spot as it is drawing many tourists from the state as well as outside the state in recent years.

He also suggested that if possible the state government or concern department may establish a research centre for Salamander in the area, it can attract more tourists or scientists.

From the studies on Himalayan newt in a different research paper, it is found that the amphibian is spread over mainly in the high altitudes and cold climatic regions of the eastern Himalayas. Therefore, preventive measures must be taken up to conserve the dwindling population of Himalayan newt at Jaimeng Lake which water becomes shallow during the winter season of the year. Destruction of habitats and reduction of species diversity can make ecosystems more vulnerable to invasive species.

The Directorate of Environment, Government of Manipur has undertaken several initiatives to preserve the habitats of Jaimeng Lake at present. It is also important for various stakeholders along with the local community and the corporate sector to come together for an effective management plan. Active management and monitoring of Jaimeng Lake over a period of time are essential.