Saying that different schemes and programmes for the people such as MGNREGS, National Food Security Act and Right to Education Act were started by the Congress government, he questioned what kind of new schemes and developmental works the BJP government has initiated.

CLP leader Okram Ibobi Singh has expressed confidence that the four Congress candidates will surely win the upcoming by-election of the state.

Ibobi was interacting with the media at the sidelines of flag hoisting ceremony of Congress candidate Salam Joy Singh of 22 Wangoi assembly constituency at Wangoi on Wednesday.

Earlier while speaking at the function, Ibobi said that the COVID management in the state has failed miserably and the people are left to suffer together. 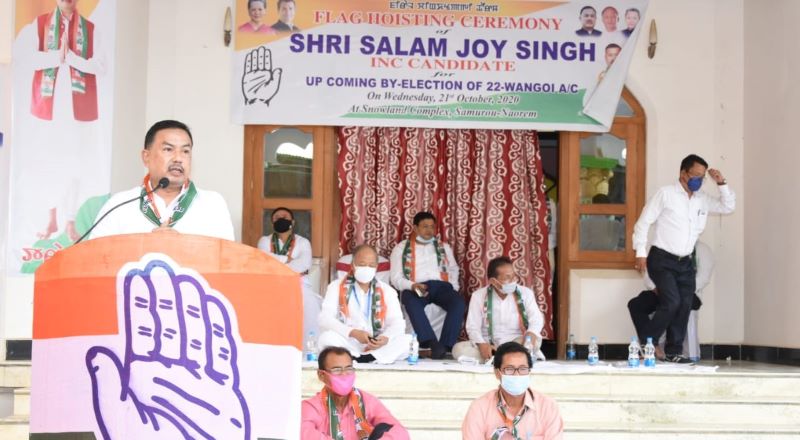 He further said that the then Congress government took the initiative to put slab/concrete cover over parts of the Nambul river stretch in Nagampal areas, Imphal so that people could not dump waste into the river.

The intention to put slab was also to utilise it as a parking lot to reduce traffic jams in bazar areas. However, the present chief minister recently inaugurated the said parking lot which was already completed by the Congress government, said Ibobi.

He stated that the Congress government treated and gave equal importance to all MLAs including the MLAs from the opposition party so that there be all round development in all constituencies of the State.

The former chief minister added that the state as well as the Centre has failed in financial management and noted that the International Monetary Fund has predicted that India will be the poorest among the South East Asian countries.

Speaking at the occasion, member of Congress Working Committee Gaikhangam said that people have regards for the ministers and MLAs in the past. But because of irresponsible leaders under the present state government, people have lost their respect for them. There are no rules and laws but a “jungle raj” in the State, he charged.

Candidate of the Congress party Salam Joy in his speech said, “for the first time in history of the State people have witnessed an opposition party within the same ruling party.”

The BJP government had claimed that it will be able to bring a change in the State in 15 months which the congress government has not been able to do in 15 years. However, even after three years, there are no visible changes in the state under the present BJP government, he said adding that voters have the power to change the society by voting for a right candidate.

Reacting to the chief minister’s statement that he would make Manipur a 'golden land' within 10 years if there are 34/35 representatives who have strong sense of sacrifice like BJP candidate Oinam Lukhoi, veteran politician O Joy said that such statement of the chief minister only shows that he did not value other council of ministers.