Uprooting the green history with the yellow mark of death

Over 200 trees in a stretch of nearly one kilometre along the Uripok-Kangchup Road in Manipur have been cut down.

“Over 200 trees in a stretch of nearly one kilometre along the Uripok-Kangchup Road have been cut down,” Loitongbam Bhorot Singh, a retired forest guard, told the Imphal Free Press. Some trees in this area are believed to be older than the Japanese invasion (1944), another local said.

In Manipur, forest preservation and planting of trees is a part of the age-old religious tradition and culture of the people, which is still carried out in different parts of the state throughout the years on different occasions. Some worship Umang Lai (forest deity), which is believed to guard the forests and the hills and bring joy and comfort to the people. The variety of trees found in the state is diverse. And the valley and hills are lush green almost through the year. However, owing to rapid urbanization and development works, the state has been witnessing heavy degrading of green areas and frequent felling of trees in recent years.

The Uripok-Kangchup road trails straight from the historical Kangla Fort area in Imphal West to the foothills of Kangchup, Imphal West District. Expansion of the road has been underway for the past few days. As a part of the road expansion project, relocation of any structure whether living or non-living has to be done so as to minimize the hindrance in the work. Relocation of electric poles was also done during the process and hundreds of trees also came in the way of the road expansion work. 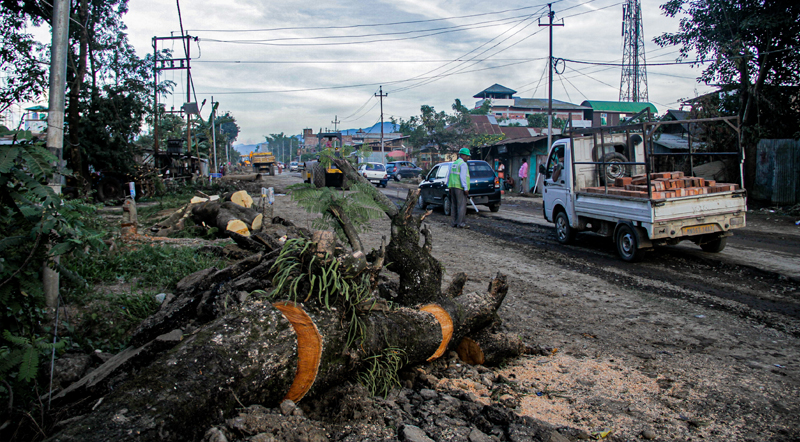 “The road is planned to be 12 m wide with 2 m wide drainage system on each side of the road,” a safety official working on the project site informed Imphal Free Press, when approached.

The wide-road project is planned in view of the increasing traffic on the Uripok-Kangchup Road. Once the road construction work is completed, it would greatly benefit the public using the road. However, the downside of any development work takes a toll on nature. Plants and trees face destruction in several infrastructure development works.

“Each tree must be around over 200 years old judging by the looks and tales told by our ancestors,” one Thanjam Lokendra, a local resident, told Imphal Free Press.

As a tradition, a ritual is performed whenever an ancient tree is cut down and it is believed that this ensures the safety of the locality from unfortunate events. “It might be a pure coincidence but one person in the vicinity died the day after the trees were uprooted,” Lokendra added.

Felling of such ancient sacred trees has an adverse effect, be it tradition or cultural belief or a scientific theory. It is common knowledge that plants produce oxygen and take in carbon dioxide, a greenhouse gas which is also the main contributor in global warming. It is estimated that a mature tree can produce more than 100 kg of oxygen every year. Trees not only produce oxygen but it also acts as an adsorbent of pollutants, toxic metals and it can be a significant resistance factor during an earthquake.

Recently Manipur titular king and Rajya Sabha MP Leishemba Sanajaoba and other officials replanted tree saplings at Chingmeirong Khongnang Ani Karak Traffic island that was uprooted due to developmental initiatives to accommodate the rising traffic volume. The locals regard it as a historical place.

Many trees have already been felled. Many more are marked with yellow paint which is an indication that it will be uprooted and removed. Is there a way to preserve ancient trees which often fall prey to development? Can we work a way around the tree? As the questions grew, an uneasy concern could be seen in the eyes of the onlookers who silently stood by, gazing helplessly as the machines of development came down heavy on tradition and in no time uprooted history.