The projects are to be taken up with the financial assistance from the Union Jal Shakti Ministry and the Minority Affairs Ministry at a total estimated cost of Rs 647 crore. Deputy commissioners of different districts unveiled the plaques of foundation stones on their respective sites on behalf of the chief minister.

Speaking at the function as chief guest, Biren said that the present state government could take up various key developmental works within a short span of around three years and half. Go to Village, Go to Hills, Meeyamgi Numit and Hill Leaders’ Day had enabled the government to identify the people’s needs and wishes, he said.

The chief minister said that he had instructed the officials concerned and work agencies to complete all the projects, whose foundation stones were laid today, by August 2021. 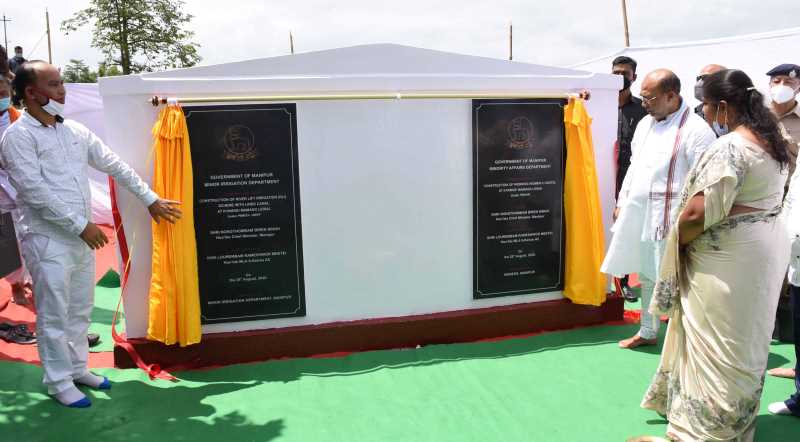 Biren also said that out of the 151 infrastructure projects whose foundation stones were laid today, many residential schools, working women’s hostels and medical facilities are included. Stating that people spend huge amounts of money in children’s education, the chief minister expressed hope that people need not send their children to Imphal or outside the state for education once these residential schools start functioning.

Mentioning other works, the chief minister also said that a guest house for the village chiefs of different districts of Manipur would be constructed at an estimated cost of around Rs 7 crore inside the Royal Palace complex, Imphal. He also informed that Barak and Makru bridges along Imphal-Jiribam Highway would be completed by December this year.

Projects which are to be taken up by the state Minority Affairs department with the financial assistance from the Union Minorities Affairs Ministry under the Pradhan Mantri Jan Vikas Karyakram include six model residential schools (worth Rs. 25.26 each) in Chandel, Tengnoupal, Pherzawl, Jiribam, Kangpokpi and Kamjong districts; two PHCs (worth Rs. 142.42 lakh each) in Thoubal and Senapati districts; 21 PHSCs (worth Rs. 66.53 lakhs each) in Chandel, Churachandpur, Senapati, Thoubal and Tamenglong districts; nine staff quarters for health professionals, patient waiting rooms; In-Patient department and medical staff rooms.

Earlier in the morning, the chief minister also laid the foundation stones for River Lift Irrigation Scheme with Lined Canal and a Working Women's Hostel at Kyamgei Mamang Leikai in Imphal East district.