The members of Nawa Marup organised Ningol Chakouba 2021,  at the premises of Club House, Marvel Zephyr, Kharadi in Pune on Sunday.

Ningol Chakouba festival strengthens the bond of love and affection among parents and daughters, brothers and sisters, and friends and also help in promoting the coexistence and social bonding by reaffirming the faith in traditional values of love and protection of people irrespective of caste and creed, NAWA Marup, Pune Secretary Ambica Shougrakpam stated in a release.

The gathering was decorated with invited guests from different parts of Pune, including those who are married to Maharastrains, Gujartis, Punjabis, Assamese, among others. Families arrived at the venue with Ningols carrying theAthenpots, in their best traditional attire, the release stated. 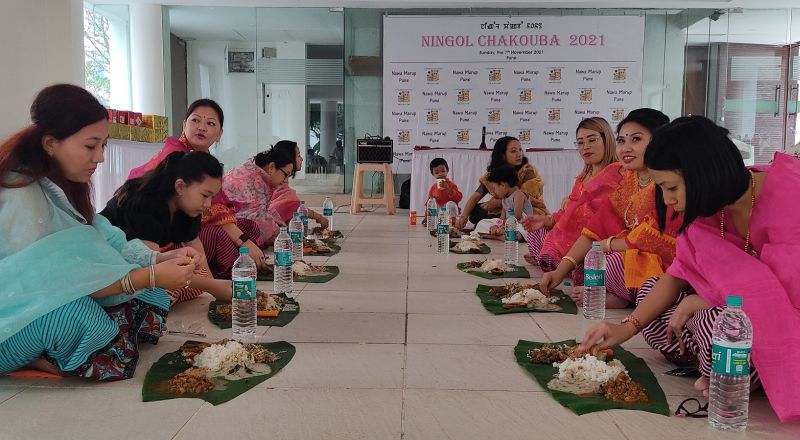 A grand meal of Manipuri cuisines, including nga atoiba thongba, nga ataoba thongba,uti, eronba, singju, chakhao, kheer, etc were prepared for the festival and the Ningols were served by the Pibas during the meal. Later, gifts were handed over to the ningol, ima, leishabiand angang, it stated.

The Ningols gave their blessings to all the Pibas for a happy and prosperous life.

Meanwhile, the official social site  for Nawa  Marup Pune was also launched during the programme. Nawa Marup, Pune was established in 2018 with families from Manipuri origin staying in and around Pune. The sole aim of the Nawa Marup is to encourage and cultivate the aged old traditions and cultures into the young minds of the kids of Manipuri families staying far away from their hometown, it added.