NPP wins two seats in Meghalaya bypolls
Sitting Member of District Council (MDC) of Sohryngkham Pyniaid Sing Syiem won the Mawryngkneng seat by defeating his closest rival, Highlander Kharmalki of the Congress by a margin of 1,816.

In a boost to the Meghalaya Democratic Alliance (MDA), the ruling National People’s Party (NPP) won the Mawryngkneng and Rajabala seats while its main ally United Democratic Party (UDP) bagged the Mawphlang seat with a huge margin.

The opposition Congress however, suffered a major setback as it not only failed to retain the Mawryngkneng and Rajabala seats but lost in the Mawphlang seat.

Elections to the three Assembly seats were held on October 30, the results of which were declared here on Tuesday.

Sitting Member of District Council (MDC) of Sohryngkham Pyniaid Sing Syiem won the Mawryngkneng seat by defeating his closest rival, Highlander Kharmalki of the Congress by a margin of 1,816.

Syiem, who is also the Chairman of the Khasi Hills Autonomous District Council (KHADC), secured a total of 14,177 votes.

However, Kharmalki, who was backed by senior Congress leader Charles Pyngrope, father of the former MLA (L) David A Nongrum, got only 12,361 votes. 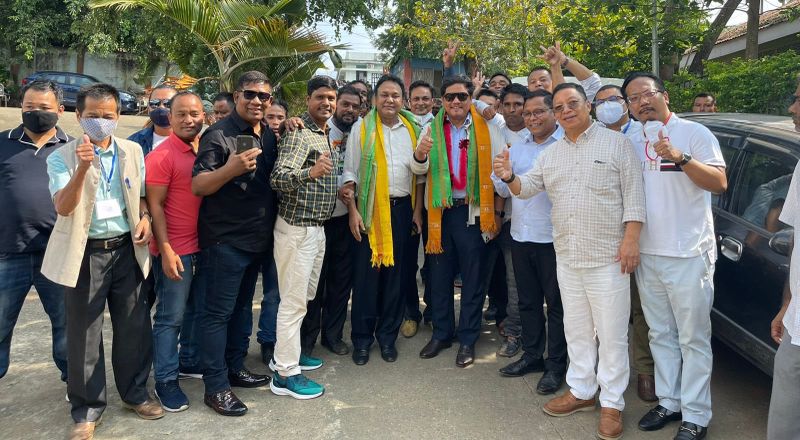 Meanwhile, football star Eugeneson Lyngdoh of the UDP was elected as the new Mawphlang legislator after defeating Congress nominee Kennedy C Khyriem by a margin of 4,401.

He retained the seat which his father (L) SK Sunn held for three and a half years after being elected for the first time in 2018, by getting 13,285 votes. Khyriem, who is also a former Mawphlang MLA, got only 8,884.

Two sitting MDCs came third in the by-elections from Rajabala and Mawphlang constituencies.

It was also a setback to the Bharatiya Janata Party (BJP) when its candidate Kingstone B Marak forfeited his security deposit in the Rajabala by-poll by getting only 333 votes.

The three independent candidates who contested the Mawryngkneng seat include Norbert Marboh, who got 1,400 votes, Erson Marwein got 485 votes and Arbiangkam Kharsohmat got only 214 votes while 238 voted for NOTA.

A total of 202 voted for NOTA in Mawphlang while 174 voters pressed the NOTA button in Rajabala.

The overall poll percentage for the three constituencies was recorded at 83.45 per cent.