No selling of duplicate indigenous cloths at Khwairamband Ima market area: Manipuri women vendors
The uniqueness of locally manufactured clothing or hand-crafted items will start losing its uniqueness if sales of such machine-made products are not banned immediately the KNKSASKL said.

Selling of machine-made duplicate indigenous cloths of Manipur like ‘Inaphi’ and others in Khwairamband Ima Keithel (only women market) area should be stopped by Friday, a women vendors group - Khwairamband Nupi Keithel, Sinpham Amadi Saktam Kanba Lup (KNKSASKL), has said.

“Non-local shopkeepers must stop selling machine-made duplicate indigenous cloths of Manipur like ‘Inaphi’ and others in Khwairamband Ima market area by Friday next, otherwise those who are selling duplicate items would face serious consequences,” KNKSASKL secretary Thingujam ongbi Rani Devi warned on Tuesday. 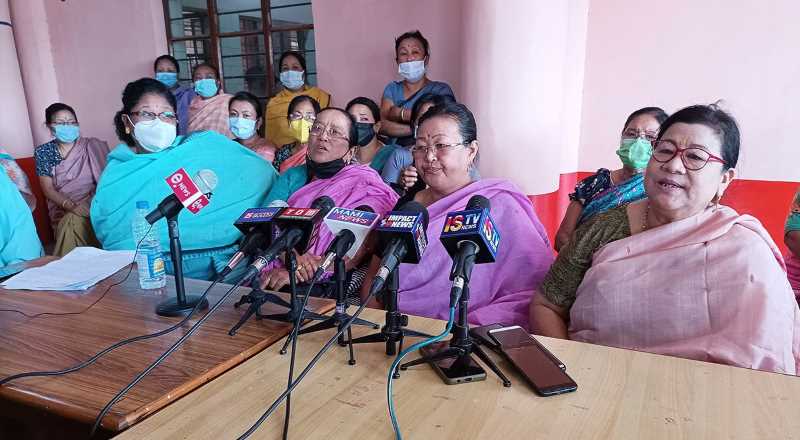 Rani Devi was speaking to the media persons in Imphal on Tuesday while pointing out the changing trends of selling indigenous items by violating the market laws of Khwairamband Ima market, which is famous as the only women’s market across the globe.

She said the three Khwairamband Ima markets have been running only by women vendors by strictly following the unique market laws since the time of pre-independence day.

However, with the change in development, the state government renovated and constructed the three markets and handed over the markets to women vendors in 2011.

Today, the number of street vendors around the Ima markets has increased.

Some of the businessmen who own big fish farms started selling their fishes by themselves on the streets and have stopped dealing with the women vendors. Since the past years, merchants used to sell items only through women vendors of Khwairamband Ima markets, she added.

The uniqueness of locally manufactured clothing or hand-crafted items will start losing its uniqueness if sales of such machine-made products are not banned immediately, she added.

The handlooms, handicraft products, fishes, fruits and vegetables are sold at the three markets under unique market laws. People should support the movement of the women vendors in order to preserve the uniqueness of Khwairamband Ima Market, Rani added.