Players and officials who are going to represent Kangpokpi and Ukhrul districts at the Manipur Olympic Games 2022 took out torch rally in their respective districts on Wednesday.

Sportspersons and officials in Kangpokpi and Ukhrul districts on Wednesday took out torch rally in their respective district headquarters ahead of the Manipur Olympic Games 2022, which is scheduled to take place from August 26 to 30 at Khuman Lampak in Imphal. 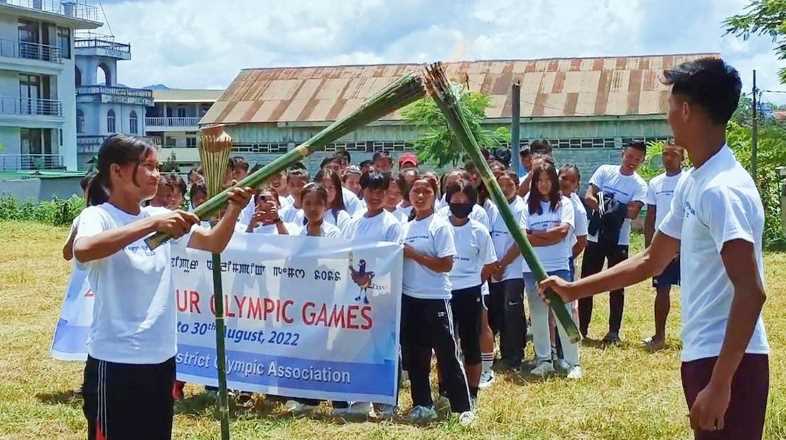 Players and officials who are going to represent Kangpokpi district in both men's and women's football, volleyball, and basketball participated in the torch rally.

He motivated the players who are going to represent the district to maintain discipline and the spirit of games and sports while participating in the State Games 2022, which is scheduled to begin on August 26. The district coordinator also wished the district representatives the best in the event.

Meanwhile, the Ukhrul District Olympic Association also organised a torch relay in the heart of the town. Over 160 athletes will represent Ukhrul in 16 different sports disciplines in the second edition of the State Games. The contingents will leave for the state capital Imphal on Thursday.

Speaking at the occasion, Ziaur Rahman, AC to DC Ukhrul conveyed his best wishes to the athletes and pinned hope that they will make Ukhrul proud through their feats.

In his speech, L Robert Meitei, District Games Coordinator recalled the genesis of Manipur Olympic Games. The first State Olympic Games was played in1988 and after decades the second edition of the games will be held this year.

"When we use the word all Manipur, all Manipur cannot be confined to the valley areas. It must reach out to all villages and every nook and corner of the state," he pointed out.

MOA is in search of productive, hardworking, quality and desiring athletes so that they could compete and bring laurels for India, he added.

Citing the War on Drugs crusade launched by Chief Minister Biren Singh, he stressed that the campaign is a part and parcel of sports. "With more than 168 athletes to represent Ukhrul in the Games, it would dissuade and save the lives of people who are using drugs."

Rammayo Chiphang, president Ukhrul District Olympic Association (UDOA)  exhorted the athletes that they were born to be players. And the best moments has arrived for them to deliver their best. He further urged to undertake self-motivation, while urging to maintain the game spirits at all times.

The programme was attended by district police officers, DLOS, athletes and well wishers, among others.