Rabichandra Singh Moiragthe is in the Indian Men's team that lifted the champion title of inaugural edition of Hero FIH Hockey Five a Side Lausanne, 2022 held at Switzerland

Hockey player Rabichandra Singh Moiragthem, who is in the Indian Men's team that lifted the champion title of inaugural edition of Hero FIH Hockey Five a Side Lausanne, 2022 held at Switzerland from June 4-5, 2022 was given a grand reception at Bir Tikendrajit International Airport on Wednesday.

Upon his return, YAS Minister Govindas Konthoujam along with Manipur Hockey, president Kh Loyalakpa and other officials greeted him, for scripting history by bagging the inaugural edition of the Hero FIH Hockey Five a Side Lausanne 2022.

Manipur Hockey described the victory as a proud moment for all hockey lovers of the state of Manipur.  For the champion title, India beat Poland by 6-4 goals in the final match, during which Rabichandra Singh Moirangthem scored a goal.

Rabichandra said, “We are very happy to have won the inaugural edition. We adapted very well to the format and the FIH Five a Side Hockey will benefit players from Manipur as we have many talented players, having varying skills for such a type of game. It certainly holds promise for players from the state in the future.” 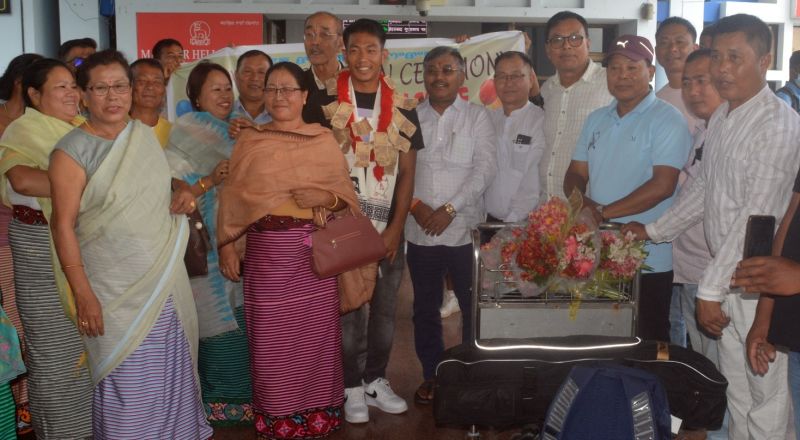 The 21-year-old Rabichandra Singh Moirangthem hails from Moirang Thoiya Leikai, Bishnupur and is the youngest son of late Nimai Singh and Bheigyabati Devi, among four children.

YAS Minister Govindas Konthoujam said, “We are very proud to have achieved such a victory in the inaugural edition. We as a government have always encouraged sports and youths to make a difference in their life.”

He added, “We have developed mini stadiums in the hills district to nurture talents. We will also see to it that every district has an astro turf facility for hockey. We will make certain amendments in Sports policy and Youth policy very soon, which overall will benefit sportspersons and youths in the long run.”