TRAU Kwakeithel posted a 4 runs victory over PCC Mayaikoibi in the 1st MNCA U-14 Boys Tournament 2021-22.

Taking the strike, YWC opener L Jagat scored a well executed 47 runs while Ashikumar W supported him from the other end with 35 runs to put up 187 runs for 8 wickets from 40 overs. Thoungamba and Th Jemson scored 16 runs each to the team total.

Chasing the target, a hurricane effort from Rajababu who made 64 runs from 93 balls went in vain as they all were bundled out for 173 runs for 9 wickets from 40 overs. M Sunanda got 17 runs. YWC bowler Nickel L was picked among the lots claiming 3 wickets while Devachandra, L Jagat bagged 2 wickets and Mangalsana got 1 wicket. YWC player L Jagat was declared the Man of the Match for his 47 runs and 2 wickets haul. 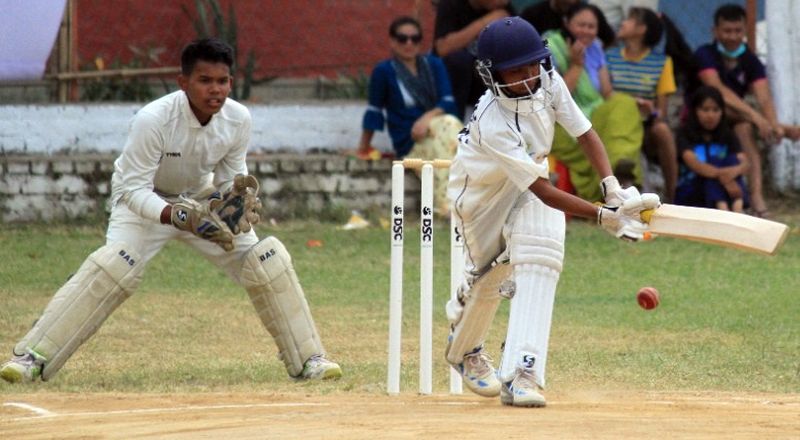 TRAU batsman made 126 runs for 8 wickets from 30 overs with Indrakumar Singh hitting an unbeaten 47 runs from 74 balls. In reply, PCC managed 122 runs for 10 wickets from 23.1 overs with Max Warokpam top scoring with 20 runs. TRAU player Indrakumar was honoured with the Man of the Match.

In another match played at PCC Ground, Mayaikoibi, TCMDC Thongju Pechu Lampak beat MPA Thounaojam by 76 runs. Thongju opener Maverick W quickfired with 64 runs while M Napolian remained not out with 32 runs to put up 229 runs for 6 wickets from 30 overs.

MPA team rested their trust on middle order batsman Th Suhan who cracked 54 runs while Moramba made 23 runs but once they got out, the innings came to end with 153 runs for 7 wickets from 30 overs. TCMDC player Rain Urikhinbam was declared the Man of the Match for his 26 runs and 2 wickets haul.