In violation of the government order against large gathering in view of the COVID-19 pandemic, Manipur Panchayat Parishad functionaries continued to hold sit-in protest and rally in large numbers without maintaining COVID-19 SOP at Porompat, Imphal East on Tuesday.

The protesters also took out a large rally from DC Office, Porompat, Imphal East to the Rural Development and Panchayati Raj Minister's bungalow. 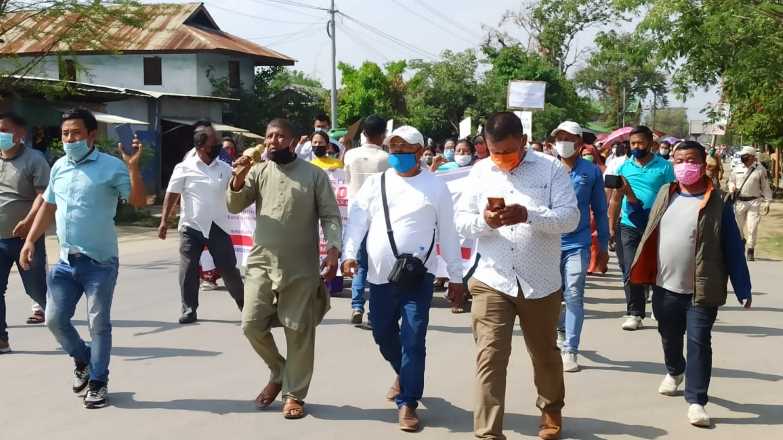 When asked the protesters whey they were violating the COVID-19 SOP, some of the protesters told Imphal Free Press that though they feared COVID-19 infection, they were risking their lives for the sake of all MGNREGS beneficiaries. Job card holders are charging Panchayat pradhans for misappropriating the funds without realising that the government not releasing the funds, they said.

“Who has no fear of the highly infectious COVID-19, but for the sake of job card holders, leaving behind the fear, we are raising our voice for the government to meet the demand,” one of the protesters who declined to be named said.

The rally was stopped by police, blocking them frpm moving beyond the City Convention, Palace compound. Police allowed only four persons re[resentating the protesters to meet the minister.

The members of the Manipur Panchayat Parishad have been conducting sit-in protest demanding release of MGNREGS funds and airing their grievances, in front of the DC Offiee at Porompat, Imphal East since April 17. 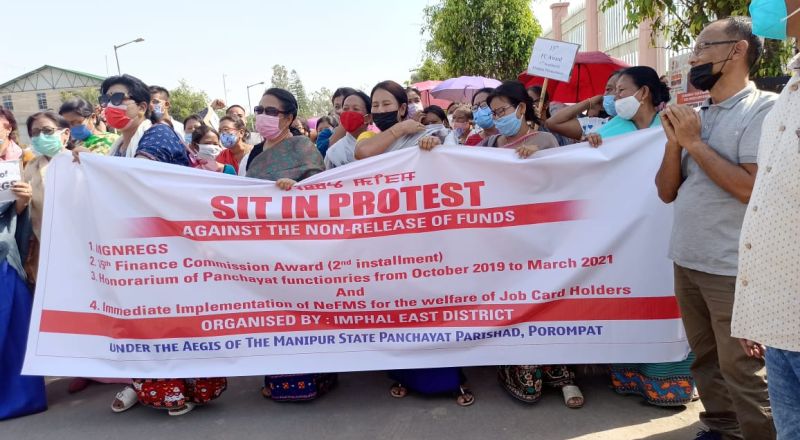 The deputy commissioner Imphal East, however, had notified that in pursuance to government order of April 18 issued by the chief secretary and chairman state executive committee, following standard operating procedures was mandatory to check the spread of the second wave of COVID-19 infection.

In view of it, the DC has banned gathering of any kind with immediate effect, except in unavoidable gatherings for religious purposes. Such gathering will also be strictly limited to 20 persons.

Covid Appropriate Behaviour, including wearing of face mask, is to be ensured by the host/organizer. Violators are to be penalised promptly.

All shops and markets to ensure wearing of face mask and take steps to prevent crowding in their shops, market areas.

Violators of government order and guidelines will be penalised, according to the government notification. 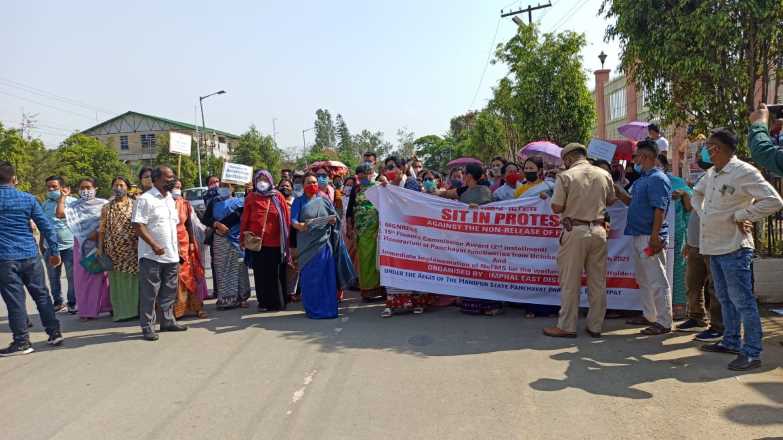 The Rural Development and Panchayati Raj Minister Thongam Biswajit had also urged the state Panchayat Parishad members to withdraw their agitation in view of the recent surge in COVID-19 spread,

On April 18, the minister said a proposal has been sent to the Finance department to release the sanctioned amount of Rs 569.16 crore under the Mahatma Gandhi National Rural Employment Guarantee Scheme (MGNREGS).

Issuing clarification on the delay in releasing the MGNREGS funds, the minister said the sanctioned amount had already been credited in the State Account on March 23.

The minister said the Provisional Utilisation Certificate of the previous sanctioned fund had been forwarded to the Ministry, which will eventually help in sanctioning the first installment of MGNREGS 2021-22 along with the liabilities. He continued that for the 15th Finance Commission, a file has also been submitted to the Finance department to sanction a sum of Rs 37,08,50,000 for Zila Parishad and Gram Panchayat as per instruction from the ministry.

Biswajit said that the release of honorarium of the Panchayati Raj Institution was delayed as there was a financial crisis in the state and the closing of the financial year in March last by the Finance department.

A sum of Rs 46.70 crore of the State Finance Commission had already been sanctioned and a file had been submitted to the Finance department to release the honorarium for the Panchayati Raj Institution members, he added.

Launching the agitation on April 17, Panchayat functionaries from six districts of the state protested against the non-release of funds under the 15th Finance Commission Award (2nd installments) and demanded their honorarium from October 2019 to March 2021. They also demanded immediate implementation of NeFMS for the welfare of job card holders.