Union Defense Minister Rajnath Singh Thursday inaugurated the Durand Cup 2022 in Manipur amid fanfare and jam-packed stadium. He said the 131st edition of the match being played in Manipur at a time when the country is celebrating ‘Azadi ka Amrit Mahotsav’ symbolises the rise of a ‘New India’.

This is the first time the Durand Cup is being played in Manipur which is considered the powerhouse of sports in the country. NEROCA FC defeated TRAU FC by 3-1 goals in the inaugural match held at Khuman Lampak main Stadium at Imphal.

Speaking on the occasion, Union Defence Minister Rajnath Singh said that the entire Northeast region has ushered in a new era of fast-paced development under the leadership of Prime Minister Narendra Modi.

Besides, the Northeast has set new records in the fields of health, education, transport, agriculture and urban development in the last few years, which is a testament to the government’s unwavering commitment to ensure holistic development of the region, he said.

The government believes in ensuring progress of all states/Union territories, he said, stressing that special emphasis is being laid on infrastructural development in far-flung areas.

Rajnath went on to say that the first Durand Cup match in Manipur, at a time when the country is celebrating ‘Azadi ka Amrit Mahotsav’, symbolises the rise of a ‘New India’, in which every region and state is moving forward hand-in-hand to take the country to greater heights.

He also voiced the Government’s resolve to encourage all kinds of sports, stating that due to the efforts in the last few years, India has scaled newer heights of success in major sporting events such as Olympics, Asian Games, and Commonwealth Games.

Players from all regions in the country are now getting equal opportunities, the results of which are now visible, he said. 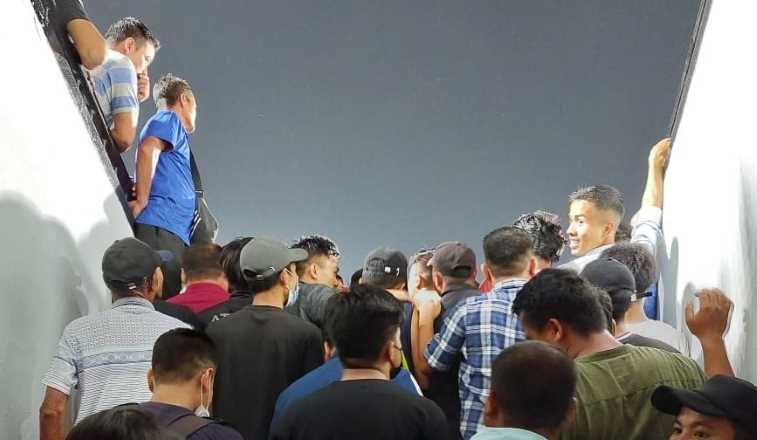 Against this backdrop, many fans were left disappointed as tickets were sold out a day before the inaugural match. And, even as the entire stadium erupted in joy after NEROCA netted a goal 16 minutes into the match, many of the ticket holders were seen trying to get into the stadium.

The Khuman Lampak main stadium, where the inaugural match was played has a capacity of only 25,000. Of this, the gallery was allegedly occupied by the VVIPs, and VIPs among others. There are viral videos and photos doing the round on social media of people desperately trying to get into the stadium.

“I bought a Rs 100 ticket but I was unable to get in the stadium even after minutes the match started. The entire stadium was already full we are told,” said a football fan from Top Leirak, Imphal East district.

Prior to the inaugural match, a colourful display of cultural dances, band display as well Durand Cup theme songs from Papon and Rewben Mashangva enthralled the jam-packed audience till the arrival of Union defense minister. Manipur Chief Minister N Biren Singh and GOC of Eastern Command were among the dignitaries who attended the match.

Earlier, cultural dances, band displays as well Durand Cup theme songs from Papon and Rewben Mashangva enthralled the jam-packed audience till the arrival of Union Minister for Defence, Rajnath Singh, who is the chief guest, and chief minister N Biren Singh and GOC of Eastern Command. Fireworks and the release of balloons also marked the grand opening of the Durand Cup of Imphal edition.