In an encouraging moment for women across the region, women orange growers won all the top three Best Orange prizes at the Tamenglong Orange Festival 2022, Manipur, reflecting growing economic empowerment among women in villages of Tamenglong district.

The prizes for the Best Orange was Rs 2 lakh for the first prize, 1.5 lakh and Rs 75,000 for the second and third prize respectively. The prizes were given away during the closing ceremony of the 17th edition of the State level Tamenglong Orange Festival on Monday, which was attended by Chief Minister N Biren Singh as chief guest, Water Resources Minister Awangbow Newmai as president.

The event was held at Mini Stadium Tamenglong Apollo Ground in Tamenglong HQ amid light showers of rain which many locals termed it a “blessing”.

Addressing the large gathering at the event as chief guest, Chief Minister N Biren Singh Biren elaborated the reason the FIFA World Cup Final was screened and why the Orange Festival was organised in Tamenglong. He said the FIFA World Cup was screened to produce the best football players. Likewise, the Orange festival is organised not for entertainment but to produce higher quality and more oranges in Tamenglong and uplift the economy of the district, he added. 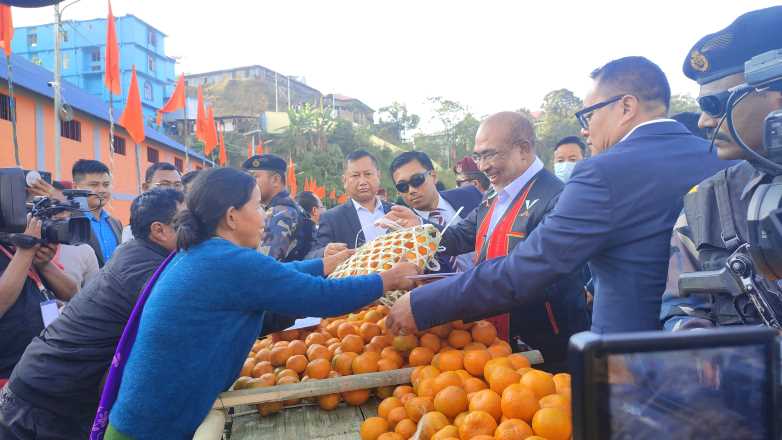 “The state government wants to make Tamenglong an Orange producing district because the orange variety grown in the district is suitable with the soil of the district,” he said, highlighting the unique taste of the orange.

The increased prize money will encourage locals to take up orange farming and make themselves economically viable and self-reliant, which will eventually improve the local economy, he added.

Biren also spoke on the need for tissue culture for the Tamenglong oranges to ensure that the local orange does not get mixed with other varieties and that it does not lose its taste or uniqueness.

Highlighting that the state has started exporting products like black rice, pineapple among other items, he said oranges can also be exported if surplus production is achieved.

“The cold storages inaugurated today will help farmers in storing their products. The government is always there for the people,” he said.

Biren also stressed that Tamenglong is moving towards development, citing various developmental projects like eco-tourism centres at Thanlon Caves, Zeilad Lake, among others.

In today’s modern world, tourism is the best option for places like Manipur and Tamenglong to improve the economy, he continued, while deliberating on the need to develop and promote the tourist spots in the state.

Reiterating his earlier assurance to the people of the district, he said that the government is making Tamenglong one of the most developed districts of the state and further highlighted that development works undertaken, including the construction of a water supply, and the ongoing work for Amusement Park near Barak River.

“We have also proposed the development of a tourist centre at Bunning,” he said.

He also appealed to the people against putting obstacles to the developmental projects.

Stressing on the importance of communication, he spoke on the works taken up on the Khongsang road to Tamenglong, Imphal-Kangchup-Tamenglong road and construction of another helipad at Tamenglong.

Biren said the government had lost at least two-and-a-half years in the last term to the Covid pandemic and another five-six months to the rains in the present term. The government had just around three years of working season, he added.

He said with the support and cooperation of the public, the government is able to bring development to the state. He also encouraged the youths to learn ‘Thang-ta’, stating that it teaches discipline and will keep them healthy.