Investigation revealed separatist designs of Mark Thangmang Haokip, who was arrested from Kishangarh, New Delhi on May 24 in connection with three different cases registered against him, say police.

Inspector General of Police, Zone-I Themthing Ngasangva on Tuesday announced that investigation has revealed that Mark Thangmang Haokip is a self-styled president of an outfit called, ‘Government of the People's Democratic Republic of Kukiland’ which was formed to establish an independent Kuki Nation.

Themthing told the media at the conference hall of superintendent of police, Imphal West, Babupara that the outfit was established in 2019 with an aim for an ‘Independent Hill Country/Kuki country’. Based on the facts, Mark was re-arrested at around 6.40 pm on Monday, said the official.

He further said a team of Manipur police brought Mark T Haokip back to Imphal from Delhi on Friday. During the time he was arrested from Delhi, the police personnel seized important incriminating documents including his dairy that contains sensitive materials, he said. Two pendrives, a laptop, a round seal for International Human Right Association (IHRA), a line seal of general secretary, IHRA, a line seal of director IHRA Indo Myanmar and Indo-Bangladesh and others from his possession were also seized from his possession.  The seized Items have been sent for forensic examination, said Themthing.

It was found that the members of the so-called ‘Government of the People's Democratic Republic of KukiLand’ had been kept concealed with the intent to facilitate designs to wage war under the garb of Human Rights group, IGP said. 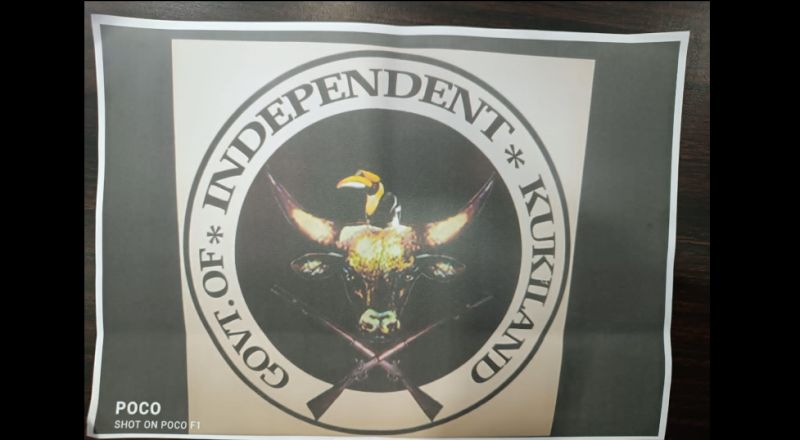 The outfit has been continuously waging propaganda through various social media platforms and actively promoting enmity between different groups on ground of race, religion, language and doing acts prejudicial to maintenance of harmony of the people of the state through its propaganda machinery, he said.

He continued that the members of the outfit themselves have been spreading false propaganda, leading to tense situations on many occasions recently. Investigation is in full swing to unearth the whole machinery of the outfit called the ‘Government of the People's Democratic Republic of Kukiland’, he said.

A case has been registered at Imphal Police Station for further investigation.

Meanwhile, Mark Haokip was produced before the court on Tuesday by the police with a prayer for a 10-day police custody.

During the hearing, an additional public prosecutor for the state submitted that the accused during his preliminary interrogation has confessed that he is a self-styled president of the said outfit along with other members.

Moreover, it is also established that the website by the domain namely, www.kukigovt.com is owned by the present accused with the purpose to propagate their ideas of independent Kuki Nation.

It was submitted that on October 23, 2019, a copy of press release signed by the accused and the three other members in their letterhead, ‘Government of the People’s Democratic Republic of Kukiland’ was seized, and the press release clearly stated that ‘Neighboring countries must respect the Sovereign Rights of the Kukis, thereby implying that there exist the notion of a sovereign Kukiland.

It was further submitted that the accused admitted that he has raised funds to finance his organisation by openly uploading the account number in the said website. Thus, there exists a prima facie evidence of accused conspiring criminally for the purpose of waging or attempting to wage or abetting wage of war against the government of India.

However, counsel for the accused submitted that whatever the accused have uploaded in the website or social media was directly or indirectly copied from one writer called, Brigadier Sushilkumar Sharma and the accused already regrets his actions.

The counsel further stated that there are no incriminating articles seized to substantiate the claim that the accused is trying to wage war against India. It was submitted that the accused is a Human Rights Activist, well settled at Delhi and he has no criminal antecedent and whatever the accused has written or posted in the social media are well within the rights of Article 19(1) of the Constitution of India.

The counsel further stated three FIRs were found recorded in the Arrest Memo but the prosecution has failed to produce the accused in other two FIRs before the court.

The counsel stated that so many people from other communities have been using the same platform in Twitter and Facebook to spew communal hatred but none of them were arrested. It was submitted that the present accused has been targeted alone in connection with the publication of his thoughts in the social media.

The court stated that some of the allegations made against the accused seemed to be of serious nature and the seized articles including the extract from the alleged website seems to be quite incriminating. Thus, in the interest of fair justice, the court remanded the accused person for a period of five days for smooth investigation.

The remand objection prayer and the bail application filed on behalf of the accused were rejected as immature.

Mark Thangmang Haokip was arrested from Kishangarh, New Delhi on May 24 by a team of Imphal police station in connection with three different cases registered against him for making defamatory and derogatory statements on social media, both in Facebook and Twitter, including against freedom fighter Padma Bhushan awardee Rani Gaidinliu.

The accused was brought back to Imphal from New Delhi on May 27 after taking transit remand from the concerned Delhi Court and was produced before the duty Magistrate, Imphal West on the same day late at night.