During the campaign, BJP candidate Huri Golmei, said that if he is voted to power, he would put top priority to work for orphans, widows, widowers and people living under below poverty line.

BJP leaders, including Union Minister of State for Minority Affairs John Barla, Works & IPR Minister Th Biswajit Singh and state BJP president A Sharda Devi attended the campaign for BJP candidate Huri Golmei in 53-Tamenglong Assembly constituency. As a part of the campaign, a one-day political convention of the Bharatiya Janata Party (BJP) was held at the Mini Stadium in Tamenglong HQ. The programme was organised by the 53-BJP Tamenglong Mandal on Friday.

Speaking on the occasion, Works and IPR Minister Th Biswajit Singh highlighted the party election manifesto and said free gas connection will be given along with two LPG cylinders each annually to all the PM Ujjwala beneficiaries of the state when the BJP is voted to power yet again. He also said pension for all the senior citizens in the state will be increased from Rs 200 to Rs 1,000. Financial assistance of PM Kisan Samman Nidhi Yojana will be increased for all the farmers from 6,000 to 8,000 per annum. Free of cost accidental insurance cover of up to 5 Lakh will be provided to all fishermen in the state, he said.

Biswajit also said that scholarships will be given to the children of small and marginal farmers and landless farmers pursuing technical education at the graduation and post-graduation level. He also informed that if the BJP government comes back to power, Manipur Skill University will be established for skilling the youth of Manipur in various sectors, establishment of All India Institute of Medical Science (AllMS) in Manipur to further advance the standard of healthcare services in the state and 100 per cent coverage of Ayushman Bharat and CMHT (Chief Ministergi Hakchelgi Tenbang) scheme to provide health insurance of 5 Lakh to all the eligible beneficiaries. 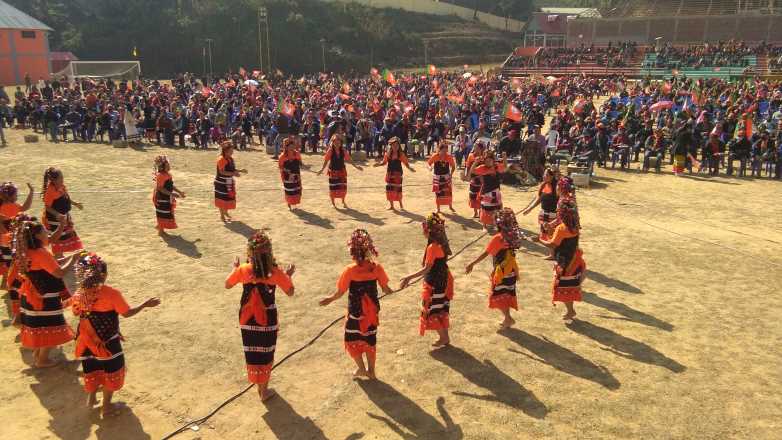 The minister further said that expanding the people's centric initiatives like Go To Village and Go To Hills, doorstep delivery of all Central and state government schemes will be introduced.

During the campaign, BJP candidate Huri Golmei, said that if he is voted to power, he would put top priority to work for orphans, widows, widowers and people living under below poverty line. He said he knows how poor people are surviving as he was born and brought up in a poor family.

The BJP candidate assured jobs to unemployed youth without taking any money, and said he would create job opportunities to many BA and MA educated youth by setting up of a B.Ed course institution in the district headquarter. He also said that he would work to bring science stream in Tamenglong college, and work to improve power in Tamenglong district.

Golmei further said he would ensure protection of the district boundary if delimitation happens during his term if elected. He is a Naga by blood, and he would stand for Naga issue. He also urged all the voters to pray for him to enable to stand and work for the Naga cause, he added.