Massive landslides and flashflood caused by heavy rainfall for days together have damaged roads, bridges, houses, forest and paddy fields in the hill districts of Manipur. While some attribute it to impacts of global warming, traditional belief points to nature's cycle. Some villagers say such excessive rainfall is witnessed after every 25 years or 50 years.

Manipur hill districts, includingTamenglong, Senapati, Kangpokpi and Noney, are reeling under the massive devastation caused by incessant rainfall. Several places remained cut off from the rest of the state as massive landslides and flash flood have damaged roads, bridges, houses, forest and paddy fields in the hill region. The region is also hit by power outages due to the inclement weather condition and telecom connectivity has been severely affected as well.

All roads connecting Tamenglong to other districts and the state capital have been cut off by landslides at different locations. Landslides continued to occur along Tamenglong-Imphal via Khoupum Road, which is used as an alternative to Khongsang road connecting Tamenglong and Imphal that remained disconnected due to the collapse of the Irang bridge. 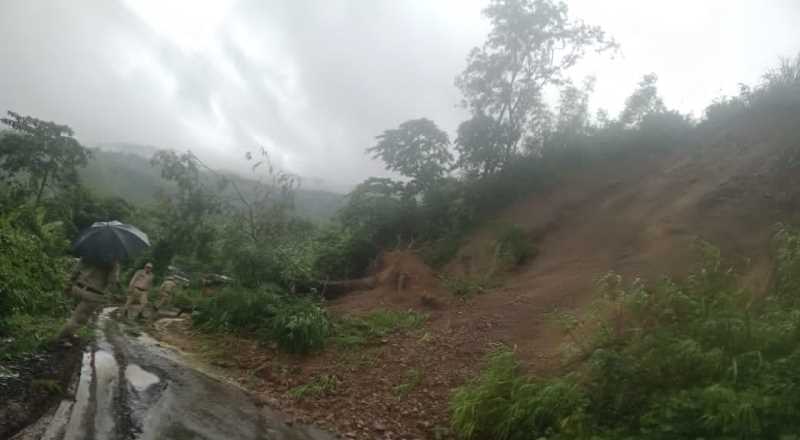 A massive landslide at Kaiphundai village along NH-37 Imphal-Jiribam road has resulted in disruptions of vehicular movement. Landslides and mudslides also occurred on Imphal-Jiribam Road near Longkao village and in between Kambiron and Nungba and Khongshang and Taobam village

Several landslides and mudslides were also reported at many locations in Imphal-Noney section.

All major rivers like Ijei Iril, Irang, Barak, Makru and Leimatak are flowing above danger level. Low lying areas have been flooded and submerged. Inter-village roads were also disconnected due to landslides at many locations.

A massive landslide also occurred at a residential area in Tamenglong headquarters, at New Salem, Ward No IV, destroying one house. However, no casualty was reported.

Is the rain devastation impact of climate change?

Speaking to the Imphal Free Press, a 76-year-old man identified as Dinchin Gonmei of Sempang village said that a large number of rodents and a swarm of insects attacked the paddy fields the previous year. When such incidents occur, it is usually followed by excessive rainfall the following year, he said.

According to the villager, there is a traditional belief that such excessive rainfall is witnessed after every after 25 years or 50 years.

Due to heavy and incessant rainfall continuing since March, most paddy fields in villages are damaged and planted crops are facing stunted growth due to the weeds that are fast outgrowing amid the rains.

One farmer from Namkaolong village told the Imphal Free Press that due to incessant rain this year, chilly plants and other crops in the fields are facing stunted growth.

He expressed that the price of chilly may increase next year as most of the plants are dying out in the fields. He said that the unpredictable weather condition due to global warming and climate change has ruined the livelihood of the farmers.

Due to incessant rains, all power supplies have been cut off since June 18. Due to lack of power supply, mobile networks are also severely affected.

The district electricity department informed that the line could not be repaired due to the bad weather. A total blackout is to be continued for the next 24 hours, those looking after the power supply in the district said.

Meanwhile, the Driver Association Tamenglong has lifted the bandh which was called over bad road conditions between Tamenglong-Khongsang road, following assurances given by the double lane construction company, Shivalaya Construction Company Pvt Ltd.

On learning of the incident, the neighbouring villagers immediately rushed to the sub-divisional headquarters to help the people and evacuated most of the residents of the bazaar area to a safer place.

The flash flood water flowed into every house in the low-lying main bazaar of the sub-divisional headquarters, and damaged the drinking water source of the Sub Divisional Headquarters and partially inundated a few paddy fields in the area.

Mudslide at Lamlenkon area cut off the main road, Imphal-Tamenglong road, which is yet to be restored.

The alternate PMGSY road from Thonglang Atongba could no longer be used as the bridge construction is yet to be completed. The current lifeline Chawangkining – T Vaichong via Makui Ashang PMGSY road was also cut off this morning.

A truck reportedly loaded with illegal timber was also pulled down into the river by the flash flood. It was reported that the ill-fated truck carrying the alleged illegal round timber logs was detained by the Assam Rifles at Banglabung, but escaped taking advantage of the heavy rainfall only to meet the unfortunate incident.

The flash flood also damaged the protection wall/base of the bailey bridge over Twilang/Irang river near T Vaichong Sub Divisional Headquarters. Multiple landslides were reported at various locations in the area.

A lengthy earth fissure was witnessed along the PMGSY road from Chawangkining between Harup Naga and Tapon Naga by a police team of Kangpokpi who returned after they could not further proceed towards Tapon Naga and T Vaichong Sub Divisional Headquarters for spot inspection.
A Tata 407 vehicle of the police team also got stuck in the mudslide at a location between Harup Naga and Tapon Naga village. With the assistance of some local people, the vehicle was towed and returned without further proceeding towards the Sub divisional headquarters for inspection.

A heavy mudslide also occurred near Thonglang Atongba sweeping away some portions of the road.

KSO Twilang block president Enock Kipgen appealed to the authority concerned to look into the grievances and hardships faced by the people of T Vaichong Sub Divisional Headquarters this morning by the fury flash flood, especially, those whose houses and hotels were damaged. He appealed for government compensation for the loss.

General secretary, Liangmei Naga Council Eastern Zone M Dinpi said that the PMGSY road between Chawangkining and T Vaichong Sub Divisional Headquarters via Makui Ashang, Tapon Namsan, and Tapon Namguang had been serving as the only lifeline of the people, but the flash flood on Sunday morning carried away a portion of the road.

Dinpi appealed to the authorities concerned for early restoration of the damaged road.

The sub divisional officer of T Vaichong Sub Division reportedly rushed to the Sub Divisional Headquarters on receiving news of the flash flood but could not reach the spot, owing to landslides at several locations and deplorable road conditions.